The director and star talk about working together again and shooting during COVID.

In ‘The Guilty’ Jake Gyllenhaal plays an LAPD detective that’s been assigned as a 911 operator, and who receives a call from a woman that’s been abducted. The movie reteams Gyllenhall with director Antoine Fuqua, and they both talked to Moviefone about their new film.

Moviefone: Jake, what was it about this story that struck a chord with you?

Jake Gyllenhaal: You know, I think for me, first of all, I think the opportunity to sort of use sound in the way the movie uses sound, experience it in that way, just technically. But I also think it's a movie about how we perceive people when we don't get to see them, the misjudgments we make, the judgments we make, the projections we put on other people. And to me, in America right now, transposing an originally Danish movie into an American context in the period of time that we made this movie was talking a lot about how broken our systems are and how those misjudgments and those perceptions, the system does not help people in that space. That's what really got me, outside of it just being like this crazy thrill ride, and you just didn't know what was going to happen next. The undercurrents of it are what really ended up hooking me.

MF: Absolutely. And for you, Antoine, what was it that interest you enough to come on to direct?

Antoine Fuqua: All the things Jake just said. First Jake, to direct Jake again after 'Southpaw' was a big plus. The script was well done. The original film was well done, the [original] Danish film. But as I listened to these interviews we've been doing lately... Today, I think part of it is that we weren't sure we were ever going to get to make another movie again as well. We're at the height of COVID, there was a lot of anxiety and fear that we may never get a chance to make another movie again, or we don't know when. And so this had all the right elements and spoke to me on subject matter. But I think also there was an urgency to do the art, to do the work right. To make it happen by any means necessary.

MF: What were some of those means necessary? And I'm going to preface this by saying you were fantastic in it. But was there ever a time... because it's really all you. We hear voices only, and we don't even see any other locations except for this call center. So it's really all on your shoulders. What was it like shooting this, and was there ever a time when you had any trepidation? Did you ever go, "oh my gosh, what have I gotten myself into?"

Gyllenhaal: Frankly, there was no other way to make a movie at the time. You put one person in a room with a crew, that was the safest way to make a movie at the time to get anything made really. I had just come off-stage, on for a year doing a monologue and telling a story alone on a stage to an audience every night. I could feel when their imaginations turned on. There's a moment when you're in a live space, and you can feel when people sort of leave watching you and go into their own space. And I love the idea of being able to do that in a cinema. Do the same sort of thing where, sure, you're watching someone's face, but you're really listening to other people. You're imagining what's happening outside in the world that you don't get to see.

And that was just inherently full attention. So I think really my trepidation only came about safety and everybody else's safety when we were making the film. It's hard to now say what it felt like at the time. Now, we're sort of coming out and people feel a little more comfortable. Obviously, there are so many things still to work through, but at the time it just didn't feel like we were going to get through it. And we were trying to make a movie that time. That was my only real trepidation was. Are we going to be safe? Is everyone going to be okay? 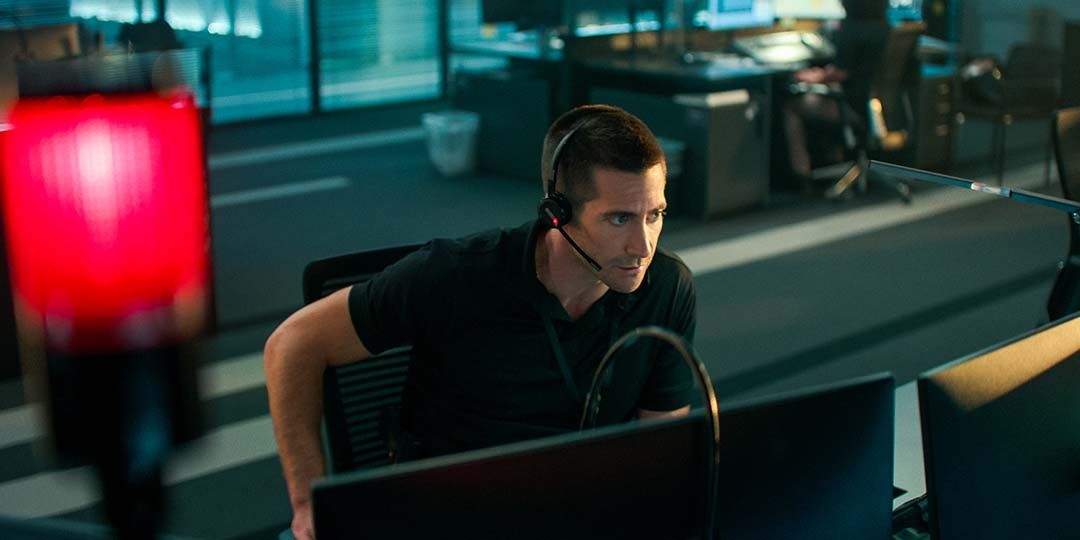 Jake Gyllenhaal in 'The Guilty'

MF: And for you, Antoine, what were the technical challenges? You have basically one actor in one room and we hear everything else. Whereas maybe you'd do a cutaway, and we'd actually go out to the street and see this band, or we'd see kind of some action. All we do, are we just hearing voices. So what were the challenges for you?

Fuqua: In that case, it was really about making sure that Jake can have real-time performance with the other actors, as you would in any film. But they weren't in the country, some of them. It's just voices, as you said. And, we had a lot of technical issues with glitches and zoom and somebody in Australia, and he'd have to get up at, I don't know what time he had. Paul had to get up at three in the morning or something. Ethan's in New York. Peter's in New York. And Jake had to perform with all the different actors. Da'Vine in his ear, with echoes and delays, and still have a rhythm and do it in real time. So that was one of the biggest challenges.

Other than that, it was really about COVID. I mean, really when we have plastic all over the floors, plastic over everything, almost after every take, when we would break after the 20-minute takes. And that was always dangerous, right? Because you don't know if someone went somewhere and then came back. So we had to watch everything, and Jake was the only one with his mask off at times. And so that's a scary thought as well. And he was in the environment. I was out in a van, but he was in an environment with a lot of people.

'The Guilty' is in limited release and will be on Netflix on October 1.