Lawless talks about the film’s rare animation style, and what it’s like doing voice-over work as opposed to being on camera.

In the new animated adventure ‘The Spine of Night,’ Lucy Lawless lends her voice to Tzod, a mysterious woman caught up in a battle against a powerful evil. Lawless spoke to Moviefone about her new film.

Moviefone: Would you mind describing your character in 'Spine of Night'?

Lucy Lawless: I played Tzod, a shamaness who comes from an endangered swamp land, who needs to save her homeland, well, save the swamp, and finds herself embroiled in a kind of worldwide conspiracy against the environment and health of the people and everything that we see going on around us today.

MF: The way you describe it sounds not too far off of some of the work you've been doing. You were in Ecuador relatively recently?

MF: Is her motivation is close to your own?

Lawless: Yeah. She's like these indigenous people that I met actually, and they need help, and they've actually won. These people are brilliant, and they actually won. So they are like Tzod, and it was an honor to meet them. You're right, there are such parallels in my real life.

MF: How did you get involved in this to begin with?

Lawless: Phil Gelatt and his producers got in touch with me and I took one look at it and went, oh my god, this reminds me of 'Clutch Cargo' when I was a child, my earliest memories of TV, right? And it was clearly this labor of love. This guy had been working for years on this, and I was like, I have to help him, this is beautiful. This is just such a cool thing. And, and it's so uncannily... it's strange, it's an uncanny piece of work for many reasons. And I think it'll catch a little bit of a wave with Gen Z. I think they might really dig this.

MF: It's an interesting rotoscoped animation that feels like a throwback to ‘Heavy Metal’ or ‘Fire and Ice.’

Lawless: And even ‘Jason and the Argonauts,’ you know what I mean? So, because of the budget they had, because they were figuring it out themselves and the way they had presumably amateur actors and amateur stunt people, and what could have been an incredible negative turns out to be the cool twist, the thing it cooks it and makes it groovy, because we Hollywood actors came in after everything was done and had to re-voice somebody else's interpretation of the lines, which is really the opposite of what we like to do. And it fits with this slightly stilted nature of the stunting as well. And again, what could have been a real negative, I think has turned into a positive because it makes the violence and the blood and the death seem more real because it doesn't happen in the natural movie rhythm. You're used to fights being like, bam, bam, bam, explosion! It has that kind of sing-song nature. This is not... this is just grim, relentless kind of... the death and stuff. So paradoxically, it makes the pain more real. 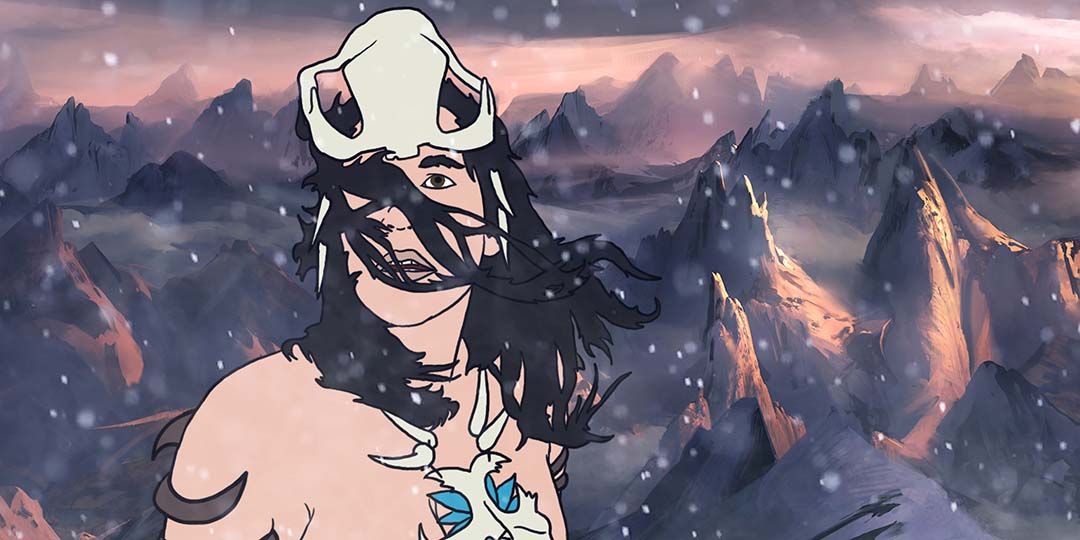 Lucy Lawless voices Tzod in 'The Spine of Night'

MF: What's that mean for you as a performer, coming in after the fact and having to match up to what you're seeing?

Lawless: Well, at first you might think this is suboptimal to say the least. But because you're doing it... you're not doing it for the money, you're doing it to help out and because you love it, that you know that there's something beautiful about this experience, you just make the best of it. It's just that uncanny... I don't even know what the word is for it, but it's like syncopation in music. It's when the expected is cooked so that you're off the beat a little bit... and yeah, I just don't even know how to explain this.

MF: Is it similar to doing the ADR that you might do for one of your own performances?

Lawless: No, but that's when you're doing your own mouth with your own rhythm of talking, which has been in use since you first learned, since you were two and a half. This is somebody else's rhythm, that’s been in them since two and a half, and also maybe a bit declamatory because they weren't very experienced actors, I would say. And it was done years ago, when they were not the age they are today. So it's not a polished performance that you're matching to. And so that's challenging, but I think it might be the saving grace.

MF: Did it give you pause that Tzod is not all that heavily dressed?

Lawless: Oh, so much better that a cartoon is not heavily dressed than me, myself on set! Yeah, she's practically naked the whole time. And she's not a nimble little fairy of a lady, she's a heavy-set, naked bog-dweller, right? And I did have some representatives that were a bit squeamish about me playing a heavy set bog-dweller, but I was like, "Yeah, that's so elemental!" I want to be that, I love to play characters that are unvarnished, and she is.

MF: And she's not sexualized at all, or hardly at all.

Lawless: You are so right. There's crotch shots and everything, except you can't see anything, she is wearing this sort of layer of blue flowers, which are very important in this story. She's not wearing anything, but there's nothing hoochie-coochie about it. Yeah, you're right, that was new. I like that.

MF: I think a lot of storytellers would have the other male characters take advantage of Tzod because of how she’s dressed. This movie, almost surprisingly, never goes there.

Lawless: You're right. That's another way that it cooks all the tropes. Yeah.

MF: Is it easier to do voice-over work just in general? Or is it just a different set of muscles you're using?

Lawless: I do find it a little harder, actually, because when I put on the hair and the costume, that's a large part of the character for me. You just slip into it, and you become that thing. Well, there isn't any of that in voice work. And furthermore, the way that you use the architecture of your face to get the right quality of audio is its own little trick. So it took me a real while to learn it, especially when it's so counter to my own accent, which is very much rolling around in the back of your mouth. It's not very useful, but that's a small thing to get over.

'The Spine of Night' is in theaters and on demand and digital.

The Spine of Night

In THE SPINE OF NIGHT, an ultra-violent fantasy epic, ancient dark magic falls into sinister hands and unleashes ages of suffering onto mankind. A group of heroes... Read the Plot