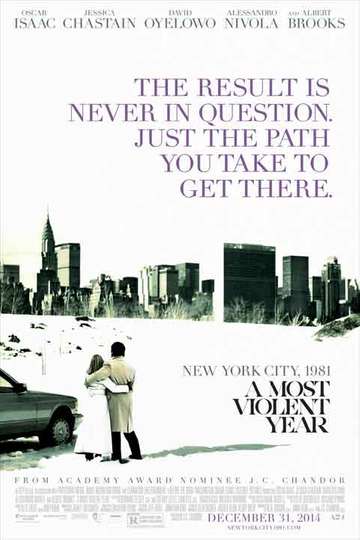 A Most Violent Year (2014)Stream and Watch Online Want to watch 'A Most Violent Year' on your TV or mobile device at home? Hunting down a streaming service to buy, rent, download, or view the J.C. Chandor-directed movie via subscription can be tricky, so we here at Moviefone want to do the heavy lifting.

We've listed a number of streaming and cable services - including rental, purchase, and subscription options - along with the availability of 'A Most Violent Year' on each platform. Now, before we get into the fundamentals of how you can watch 'A Most Violent Year' right now, here are some particulars about the Participant, Imagenation Abu Dhabi FZ, FilmNation Entertainment, Before the Door Pictures, Washington Square Films, Old Bull Pictures, CounterNarrative Films drama flick.

Released November 6th, 2014, 'A Most Violent Year' stars Oscar Isaac, Jessica Chastain, David Oyelowo, Alessandro Nivola The R movie has a runtime of about 2 hr 5 min, and received a user score of 66 (out of 100) on TMDb, which assembled reviews from 1,096 top users.

Curious to know what the movie's about? Here's the plot: "A thriller set in New York City during the winter of 1981, statistically one of the most violent years in the city's history, and centered on the lives of an immigrant and his family trying to expand their business and capitalize on opportunities as the rampant violence, decay, and corruption of the day drag them in and threaten to destroy all they have built."

The Gambler
Literature professor Jim Bennett leads a secret life as a high-stakes...

Inherent Vice
In Los Angeles at the turn of the 1970s, drug-fueled detective Larry "...

The Disappearance of Eleanor Rigby: Them
A New York couple's relationship is tested after the loss of their chi...

'71
A young British soldier must find his way back to safety after his uni...

The Drop
Bob Saginowski finds himself at the center of a robbery gone awry and...

Hand in Hand
From the moment they meet - and against their will - Helene and Joachi...