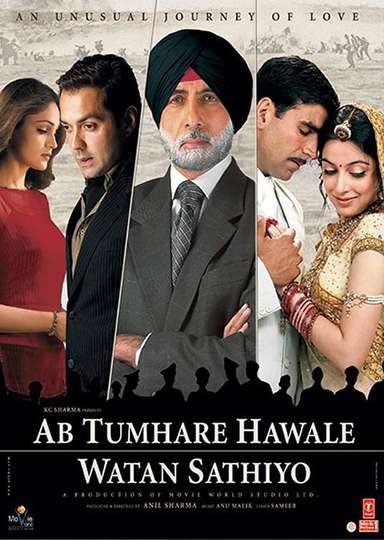 "An unusual journey of love"
TMDb Score
40
NR 3 hr 12 min
Major General Amarjeet Singh (Amitabh Bachchan) is a dedicated officer for the Indian army. His son Lieutenant Commander Vikramjeet Singh (Bobby Deol) follows in his footsteps and joins the army. Amarjeet is extremely proud of Vikramjeet but tragedy strikes when Vikramjeet is killed in action. Many years pass, Vikramjeet's son Captain Kunal Singh (Bobby Deol) joins the army but has no intentions of remaining there. He instead plans to leave, settle abroad and earn lots of money. Amarjeet is disappointed with Kunal as he hopes his grandson would do something to honour his deceased father. Kunal comes across a desert party and sees Shweta Bhansali (Divya Khosla). It is love at first sight for him but she totally ignores him and does everything to avoid him. However she is doing this for a reason- she was once married. Shweta fell in love and married Major Rajeev Singh (Akshay Kumar), unfortunately he was deployed for action on his wedding day and he had to leave his newly wed bride.
Show More
DirectorAnil Sharma
StarringAmitabh BachchanAkshay KumarBobby Deol
Movie DetailsFull Cast & Crew