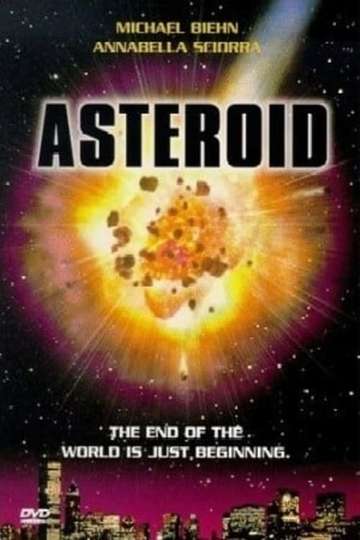 Want to behold the glory that is 'Asteroid' on your TV or mobile device at home? Tracking down a streaming service to buy, rent, download, or watch the Bradford May-directed movie via subscription can be tricky, so we here at Moviefone want to help you out.

Read on for a listing of streaming and cable services - including rental, purchase, and subscription alternatives - along with the availability of 'Asteroid' on each platform when they are available. Now, before we get into all the details of how you can watch 'Asteroid' right now, here are some details about the Davis Entertainment, NBC action flick.

Released February 16th, 1997, 'Asteroid' stars Michael Biehn, Annabella Sciorra, Zachary Charles, Don Franklin The PG movie has a runtime of about 2 hr, and received a user score of 58 (out of 100) on TMDb, which assembled reviews from 31 respected users.

Want to know what the movie's about? Here's the plot: "With the discovery of an incoming asteroid, the government of America formulate a plan to destroy it. When the plan fails, all the world can do is wait. The main impact zone is revealed to be Dallas, Texas. Generally, the plot follows the lives and reactions of several characters: an astronomer, her father, her son, two firefighters from Kansas, two young doctors in Dallas and the heads of the government agency in charge of the situation." .

Jurassic Park
"An adventure 65 million years in the making."
The Hitchhiker's Guide to the Galaxy
"Don't leave Earth without it"

Transformers: Revenge of the Fallen
"Revenge is coming."
Men in Black
"Protecting the Earth from the scum of the universe."
The Rainmaker
"They were totally unqualified to try the case of a lifetime... but every underdog has his day."
It Takes Two
"Two identical strangers. Two different worlds. One perfect match."
Dante's Peak
"The pressure is building..."
Asteroid-a-Geddon
"Only one chance to stop it"
Asteroid: Final Impact
"Saving mankind from a dark future."
Oliver & Company
"The first Disney movie with attitude."
Deep Impact
"Oceans Rise. Cities Fall. Hope survives."
The NeverEnding Story
"A boy who needs a friend finds a world that needs a hero in a land beyond imagination!"

Men in Black II
"Back in black."
Twister
"Don't breathe. Don't look back."
Armageddon
"The Earth's Darkest Day Will Be Man's Finest Hour"