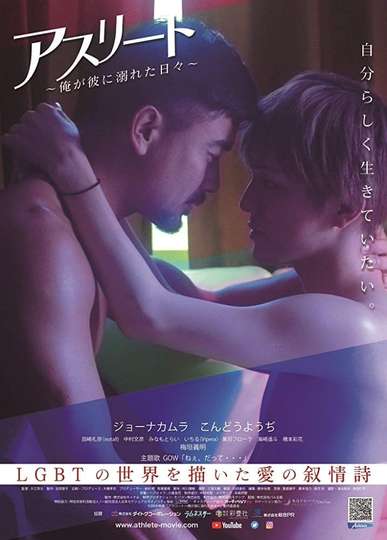 Yearning to watch 'Athlete' in the comfort of your own home? Hunting down a streaming service to buy, rent, download, or watch the Takamasa Oe-directed movie via subscription can be difficult, so we here at Moviefone want to do the work for you.

Read on for a listing of streaming and cable services - including rental, purchase, and subscription choices - along with the availability of 'Athlete' on each platform. Now, before we get into all the details of how you can watch 'Athlete' right now, here are some particulars about the キャナル, モバコン株式会社, 株式会社ネクシブ flick.

Released , 'Athlete' stars Joe Nakamura, Kondo Yohdi, Reina Tasaki, Yoshiaki Umegaki The movie has a runtime of about 1 hr 28 min, and received a user score of 71 (out of 100) on TMDb, which collated reviews from 8 respected users.

You probably already know what the movie's about, but just in case... Here's the plot: "A former athlete, Kōhei is a swimmer with a wife and child. One day his wife asks him to sign the divorce papers. From shock, he escapes to alcohol, finding himself one night in Tokyo’s gay district, Shinjuku Ni-chōme, where his fateful meeting awaits with Yūtaka, a beautiful twink. Yūtaka makes a living from live sex webcams with men, but his dream is to become an anime creator. Yūtaka however is tortured because he still hadn't come out to his father who collapsed from illness. Kōhei and Yūtaka both carry a cross. They hesitate but can't stop being drawn to each other as if they need each other. The two fall for each other, even at times hurting the other. Kōhei however begins to struggle about what it means "to love somebody" and questions his "sexuality", through his contacts with different personalities in the gay district. Meanwhile, Yūtaka encounters his gay ex Atsushi, and starts to realize he will never be able to be with Kōhei, who is gay-for-pay."

'Athlete' is currently available to rent, purchase, or stream via subscription on Dekkoo .