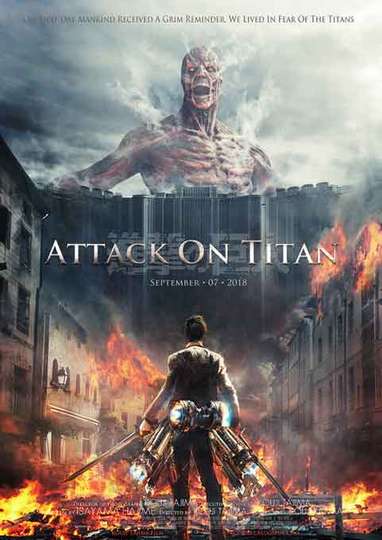 Attack on Titan II: End of the World

"The world is merciless."
TMDb Score
57
NR 1 hr 27 minFantasy, Science Fiction, Action, Horror
Eren leaves to restore a break in the wall destroyed by a Titan. He comes under attack by the Titans and is cornered. Shikishima comes to his aid. The titans never stops attacking. Eren is now injured and tries to protect Armin, but is swallowed by a titan. A Titan with black hair appears and begins to expel the other titans.
Show More
DirectorShinji Higuchi
StarringHaruma MiuraKiko MizuharaKanata Hongo
Where to WatchFull Cast & Crew

Movies Like Attack on Titan II: End of the World

Maze Runner: The Scorch Trials
Thomas and his fellow Gladers face their greatest challenge yet: searc...

Godzilla
French nuclear tests irradiate an iguana into a giant monster that vic...

Timecrimes
A man accidentally gets into a time machine and travels back in time n...

The Forest
Set in the Aokigahara Forest, a real-life place in Japan where people...

Along with the Gods: The Last 49 Days
In the afterlife, one guardian helps a man through his trials, while h...

#Alive
As a grisly virus rampages a city, a lone man stays locked inside his...

Weathering with You
The summer of his high school freshman year, Hodaka runs away from his...

Rurouni Kenshin Part II: Kyoto Inferno
Kenshin has settled into his new life with Kaoru and his other friends...