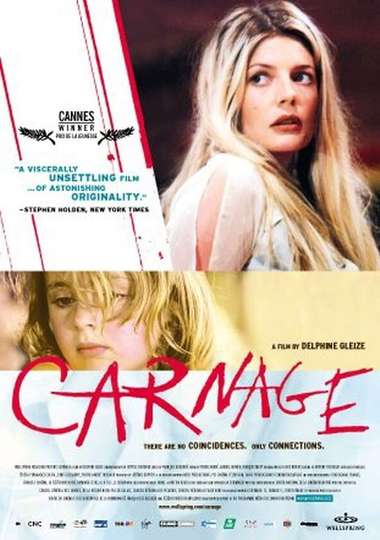 Need to watch 'Carnage' on your TV or mobile device at home? Finding a streaming service to buy, rent, download, or watch the Delphine Gleize-directed movie via subscription can be challenging, so we here at Moviefone want to help you out.

We've listed a number of streaming and cable services - including rental, purchase, and subscription alternatives - along with the availability of 'Carnage' on each platform when they are available. Now, before we get into the various whats and wheres of how you can watch 'Carnage' right now, here are some finer points about the drama flick.

Released , 'Carnage' stars Chiara Mastroianni, Ángela Molina, Lio, Esther Gorintin The movie has a runtime of about 2 hr 10 min, and received a user score of 57 (out of 100) on TMDb, which collated reviews from 7 knowledgeable users.

What, so now you want to know what the movie's about? Here's the plot: "After a bull is killed in a bullfight, its body parts are transported across Spain, France, Italy and Belgium. The bull's parts fall into the wide variety of people, including: an Italian actress selling the bones in a supermarket promotion, a Spanish woman who dines on its steaks, a little girl in France who imagines a world where animals are much larger than humans, and a taxidermist whose wife is simultaneously giving birth to quintuplets." .