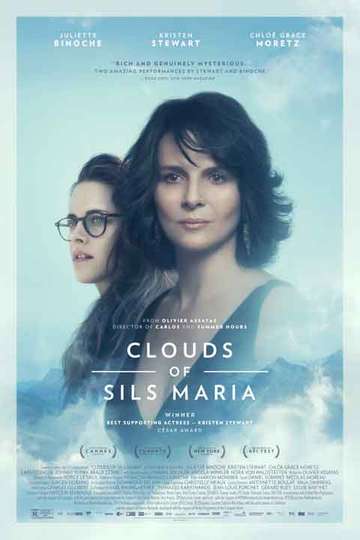 Need to watch 'Clouds of Sils Maria' on your TV, phone, or tablet? Discovering a streaming service to buy, rent, download, or watch the Olivier Assayas-directed movie via subscription can be confusing, so we here at Moviefone want to take the pressure off.

Below, you’ll find a number of top-tier streaming and cable services - including rental, purchase, and subscription alternatives - along with the availability of 'Clouds of Sils Maria' on each platform. Now, before we get into the nitty-gritty of how you can watch 'Clouds of Sils Maria' right now, here are some particulars about the CAB Productions, C.G. Cinema, Pallas Film, Canal+, ARTE France Cinéma, Vortex Sutra, ZDF/Arte, Orange Studio, RTS, SRG SSR drama flick.

Released April 10th, 2015, 'Clouds of Sils Maria' stars Juliette Binoche, Kristen Stewart, Chloë Grace Moretz, Lars Eidinger The R movie has a runtime of about 2 hr 4 min, and received a user score of 67 (out of 100) on TMDb, which put together reviews from 577 well-known users.

Curious to know what the movie's about? Here's the plot: "A veteran actress comes face-to-face with an uncomfortable reflection of herself when she agrees to take part in a revival of the play that launched her career 20 years earlier."

The Comedy
Indifferent to the notion of inheriting his father's estate, a restles...

Breaking the Girls
A naive college student loses a scholarship at the hands of a classmat...

Personal Shopper
A personal shopper in Paris refuses to leave the city until she makes...

Certain Women
Three strong-willed women strive to forge their own paths amidst the w...

Two Days, One Night
Sandra is a young woman who has only one weekend to convince her colle...

Heaven Knows What
A young heroin addict roams the streets of New York to panhandle and g...