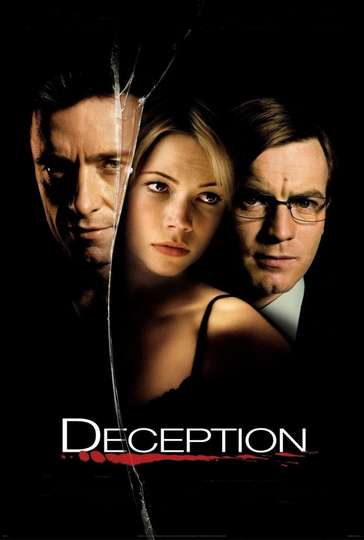 Looking to feast your eyes on 'Deception' on your TV, phone, or tablet? Finding a streaming service to buy, rent, download, or view the Marcel Langenegger-directed movie via subscription can be tricky, so we here at Moviefone want to do the work for you.

We've listed a number of streaming and cable services - including rental, purchase, and subscription options - along with the availability of 'Deception' on each platform when they are available. Now, before we get into the fundamentals of how you can watch 'Deception' right now, here are some specifics about the MRC, Kanzaman, Rifkin-Eberts, Dune Entertainment III, Seed Productions mystery flick.

Released April 25th, 2008, 'Deception' stars Hugh Jackman, Ewan McGregor, Michelle Williams, Natasha Henstridge The R movie has a runtime of about 1 hr 47 min, and received a user score of 59 (out of 100) on TMDb, which compiled reviews from 541 top users.

What, so now you want to know what the movie's about? Here's the plot: "As a corporate auditor who works in a number of different offices, Jonathan McQuarry wanders without an anchor among New York's power brokers. A chance meeting with charismatic lawyer Wyatt Bose leads to Jonathan's introduction to The List, an underground sex club. Jonathan begins an affair with a woman known only as S, who introduces Jonathan to a world of treachery and murder."

Don't Say a Word
"...I'll never tell."
Funny Games
"You must admit, you brought this on yourself"
Clear and Present Danger
"The war of drugs would lead him to the war of power."
Unknown
"Take Back Your Life"
Swordfish
"Log On. Hack In. Go Anywhere. Get Everything."

Daybreakers
"In 2019, The Most Precious Natural Resource... Is Us."
Margrete: Queen of the North

Pride and Glory
"Truth. Honor. Loyalty. Family. What are you willing to sacrifice?"

The Island
"Your time will come..."

Perfect Stranger
"How Far Would You Go To Keep A Secret?"
The Way Back
"Their escape was just the beginning."

Angels & Demons
"The holiest event of our time. Perfect for their return."

Gothika
"Because someone is dead doesn't mean they're gone."

Salmon Fishing in the Yemen
"Make the Improbable Possible"
From Hell
"Only the legend will survive."
Machine Gun Preacher
"Hope is the greatest weapon of all"

Escape Plan
"No one breaks out alone."

Casanova
"He won every woman's heart. She won his."
The Negotiator
"He frees hostages for a living. Now he's taking hostages to survive."
Untraceable
"A cyber killer has finally found the perfect accomplice: You."

Hugh Jackman in First Teaser Trailer for ‘The Son’