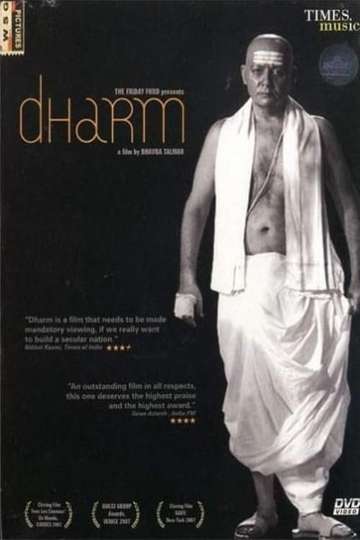 Want to behold the glory that is 'Dharm' in the comfort of your own home? Hunting down a streaming service to buy, rent, download, or watch the Bhavna Talwar-directed movie via subscription can be difficult, so we here at Moviefone want to help you out.

Below, you'll find a number of top-tier streaming and cable services - including rental, purchase, and subscription choices - along with the availability of 'Dharm' on each platform when they are available. Now, before we get into the nitty-gritty of how you can watch 'Dharm' right now, here are some details about the WSG Pictures history flick.

Released , 'Dharm' stars Pankaj Kapur, Supriya Pathak, Hrishitaa Bhatt, Pankaj Tripathi The movie has a runtime of about 1 hr 45 min, and received a user score of 56 (out of 100) on TMDb, which assembled reviews from 11 respected users.

Interested in knowing what the movie's about? Here's the plot: "The story is based in Banaras and is about a Hindu Priest Chaturvedi (Pankaj Kapoor) who follows the scriptures to practice Hindu religion. When a child is abandon by a woman and brought in his house by his daughter - after initial hesitation but due to requests from his wife (Supriya Pathak) - the family adapts the child; only to know after 4 years that the child is a Muslim. The family gives away the child and Chaturvedi engulfs himself in the purification process to cleanse his body, mind and soul due to contact with a Muslim soul. By the time, Chaturvedi thinks he is fully purified – the child reappears – seeking refuge, due to Hindu- Muslim riots. This is the time Chaturvedi finally realizes that the true religion is - religion where humans help humans – humanity."

'Dharm' is currently available to rent, purchase, or stream via subscription on Apple iTunes, .

The Pirates: The Last Royal Treasure

The King's Daughter
"What on Earth can hold more power than a king?"

No Man of God

The Electrical Life of Louis Wain

Till
"Witness the power of a mother’s love."

12 Mighty Orphans
"Based on the true story of the team that inspired a nation."

Judas and the Black Messiah
"You can kill a revolutionary but you can't kill the revolution."

House of Gucci
"A legacy worth killing for."