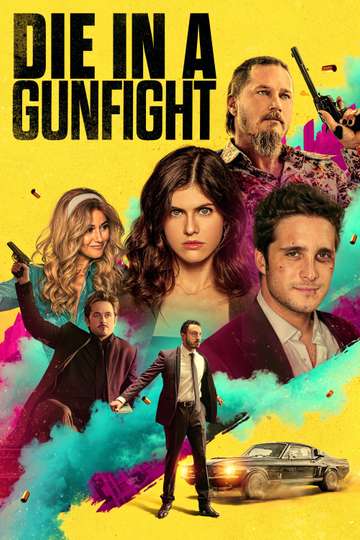 Die in a Gunfight (2021)Stream and Watch Online

Yearning to watch 'Die in a Gunfight' on your TV, phone, or tablet? Tracking down a streaming service to buy, rent, download, or view the Collin Schiffli-directed movie via subscription can be tricky, so we here at Moviefone want to do right by you.

We've listed a number of streaming and cable services - including rental, purchase, and subscription choices - along with the availability of 'Die in a Gunfight' on each platform when they are available. Now, before we get into the various whats and wheres of how you can watch 'Die in a Gunfight' right now, here are some finer points about the Lionsgate, Digital Ignition Entertainment, Align action flick.

Released July 16th, 2021, 'Die in a Gunfight' stars Diego Boneta, Alexandra Daddario, Travis Fimmel, Justin Chatwin The R movie has a runtime of about 1 hr 32 min, and received a user score of 56 (out of 100) on TMDb, which compiled reviews from 71 top users.

Curious to know what the movie's about? Here's the plot: "Mary and Ben are the star-crossed black sheep of two powerful families engaged in a centuries-long feud. When the pair reignite a romance after many years apart, their forbidden love draws a motley assortment of schemers and killers into their orbit, and as fists and bullets fly, it becomes clear that violent delights will have violent ends."

'Die in a Gunfight' Release Dates

Bros
"A romantic comedy that gives you all the feels."