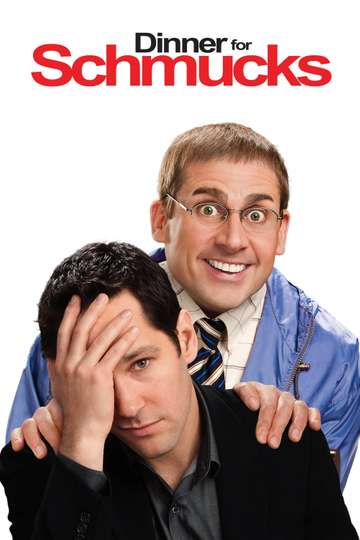 Want to watch 'Dinner for Schmucks' on your TV or mobile device at home? Hunting down a streaming service to buy, rent, download, or watch the Jay Roach-directed movie via subscription can be challenging, so we here at Moviefone want to do the heavy lifting.

Read on for a listing of streaming and cable services - including rental, purchase, and subscription alternatives - along with the availability of 'Dinner for Schmucks' on each platform when they are available. Now, before we get into all the details of how you can watch 'Dinner for Schmucks' right now, here are some details about the Paramount, DreamWorks Pictures, Spyglass Entertainment, Everyman Pictures, Reliance Big Entertainment, Parkes/MacDonald Productions comedy flick.

Released July 30th, 2010, 'Dinner for Schmucks' stars Steve Carell, Paul Rudd, Zach Galifianakis, Jemaine Clement The PG-13 movie has a runtime of about 1 hr 54 min, and received a user score of 56 (out of 100) on TMDb, which assembled reviews from 1,476 knowledgeable users.

What, so now you want to know what the movie's about? Here's the plot: "Rising executive Tim Conrad works for a boss who hosts a monthly dinner in which the guest who brings the biggest buffoon gets a career-boost. Tim plans on not attending until he meets Barry, a man who builds dioramas using stuffed mice. Barry's blundering but good intentions send Tim's life into a downward spiral, threatening a major business deal and possibly scuttling Tim's engagement to his fiancee."

Forgetting Sarah Marshall
"You lose some, you get some."
Role Models
"They're about to get more than they plea-bargained for."

The Campaign
"May the best loser win."
Get Smart
"Saving The World...And Loving It!"
Hall Pass
"One week. No rules."
Get Him to the Greek
"Aaron Green has 72 hours to get a Rock Star from London to L.A. Pray for him."

Due Date
"Leave your comfort zone."

The Dilemma
"Two best friends. Nothing could come between them... or could it?"

Hello, My Name Is Doris
"She's not ready to act her age"

Year One
"Meet your ancestors"

Couples Retreat
"It may be paradise... but it's no vacation."

The 40 Year Old Virgin
"The longer you wait, the harder it gets."

Anchorman: The Legend of Ron Burgundy
"They bring you the news so you don't have to get it yourself."

Date Night
"One ordinary couple. One little white lie."
Cop Out
"Rock out with your Glock out"