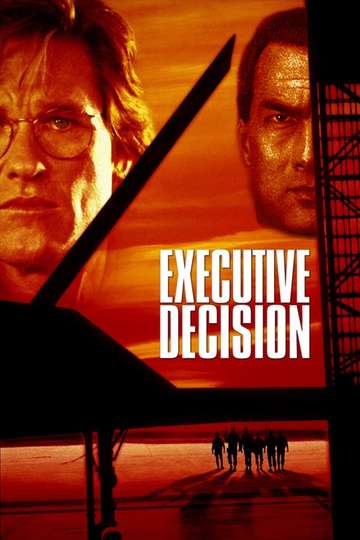 Looking to watch 'Executive Decision' on your TV or mobile device at home? Finding a streaming service to buy, rent, download, or watch the Stuart Baird-directed movie via subscription can be a huge pain, so we here at Moviefone want to do the work for you.

Read on for a listing of streaming and cable services - including rental, purchase, and subscription choices - along with the availability of 'Executive Decision' on each platform. Now, before we get into the fundamentals of how you can watch 'Executive Decision' right now, here are some particulars about the Silver Pictures, Warner Bros. Pictures drama flick.

Released March 15th, 1996, 'Executive Decision' stars Kurt Russell, Steven Seagal, Halle Berry, John Leguizamo The R movie has a runtime of about 2 hr 13 min, and received a user score of 62 (out of 100) on TMDb, which assembled reviews from 670 experienced users.

Want to know what the movie's about? Here's the plot: "Terrorists hijack a 747 inbound to Washington D.C., demanding the release of their imprisoned leader. Intelligence expert David Grant (Kurt Russell) suspects another reason and he is soon the reluctant member of a special assault team that is assigned to intercept the plane and hijackers."

Hard Rain
Get swept up in the action as an armored car driver (Christian Slater)...

Under Siege 2: Dark Territory
A passenger train has been hijacked by an electronics expert and turne...

The Glimmer Man
A former government operative renowned for his stealth, Jack Cole is n...