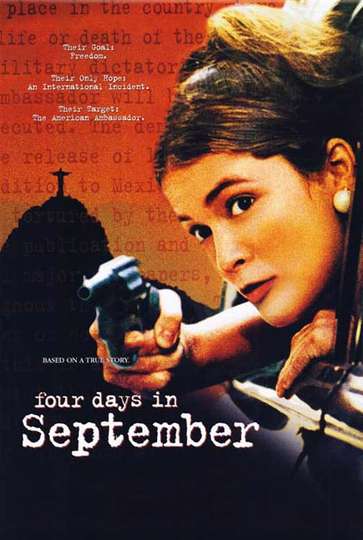 "Their goal: freedom. Their only hope: an international incident. Their target: the American ambassador."
TMDb Score
74
R 1 hr 50 minMay 1st, 1997History, Thriller, Drama
Fernando, a journalist, and his friend César join terrorist group MR8 in order to fight Brazilian dictatorial regime during the late sixties. Cesare, however, is wounded and captured during a bank hold up. Fernando then decides to kidnap the American ambassador in Brazil and ask for the release of fifteen political prisoners in exchange for his life.
Show More
DirectorBruno Barreto
StarringAlan ArkinPedro CardosoFernanda Torres
Full Cast & CrewNewsBuy DVD

'The Kominsky Method' Is Officially Renewed for Season 2

Baptism of Blood
In São Paulo, in the late 1960s, the convent of the Dominican friars b...

My Uncle Killed a Guy
Eder (Lázaro Ramos) is arrested after confessing the murder of a man....

Brainstorm
A trip to the mental institution hell. This odyssey is lived by Neto,...

Lisbela and the Prisoner
Lisbela is a young woman who loves going to the movies. Leléu is a con...

The Year My Parents Went on Vacation
A boy is left alone in a Jewish neighborhood in the year of 1970, wher...

Zuzu Angel
Covering the last years of the famous Brazilian fashion designer in he...