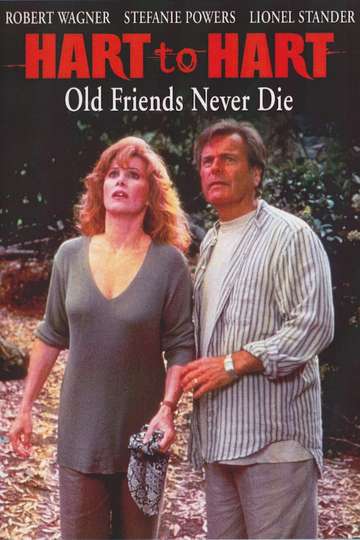 Yearning to watch 'Hart to Hart: Old Friends Never Die' on your TV or mobile device at home? Searching for a streaming service to buy, rent, download, or view the Peter Roger Hunt-directed movie via subscription can be challenging, so we here at Moviefone want to do right by you.

We've listed a number of streaming and cable services - including rental, purchase, and subscription options - along with the availability of 'Hart to Hart: Old Friends Never Die' on each platform when they are available. Now, before we get into the nitty-gritty of how you can watch 'Hart to Hart: Old Friends Never Die' right now, here are some specifics about the Papazian-Hirsch Entertainment International, Columbia Pictures Television mystery flick.

Released May 6th, 1994, 'Hart to Hart: Old Friends Never Die' stars Robert Wagner, Stefanie Powers, Lionel Stander, David Rasche The NR movie has a runtime of about 1 hr 30 min, and received a user score of 66 (out of 100) on TMDb, which compiled reviews from 8 well-known users.

Interested in knowing what the movie's about? Here's the plot: "The Harts find themselves in the middle of a dangerous murder plot, but it isn't clear if the plot it a famous author's fictional murder-mystery, or an actual murder plot, until Jonathan finds himself the unsuspecting target of a killer. It begins to look like the culprit behind the plot is an old friend, Frank Crane, but there may be a connection to a corporate takeover of Hart Industries as well."