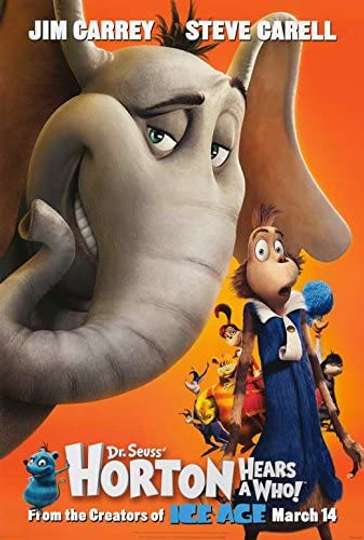 Horton Hears a Who! (2008)Stream and Watch Online

Need to watch 'Horton Hears a Who!' on your TV or mobile device at home? Hunting down a streaming service to buy, rent, download, or view the Jimmy Hayward-directed movie via subscription can be tricky, so we here at Moviefone want to do right by you.

Below, you'll find a number of top-tier streaming and cable services - including rental, purchase, and subscription alternatives - along with the availability of 'Horton Hears a Who!' on each platform when they are available. Now, before we get into the fundamentals of how you can watch 'Horton Hears a Who!' right now, here are some details about the 20th Century Fox, Blue Sky Studios, 20th Century Fox Animation adventure flick.

Curious to know what the movie's about? Here's the plot: "One day, Horton the elephant hears a cry from help coming from a speck of dust. Even though he can't see anyone on the speck, he decides to help it. As it turns out, the speck of dust is home to the Whos, who live in their city of Whoville. Horton agrees to help protect the Whos and their home."

'Horton Hears a Who!' Release Dates

Monsters vs Aliens
"When aliens attack, monsters fight back."

The Lorax
"Meet the original force of nature."

Chicken Little
"When it comes to saving the world, it helps to be a little chicken."

Shark Tale
"Behind every little fish is a great white lie."
Megamind
"His brain is off the chain."

Open Season
"All Fur One. One Fur All."

Happy Feet
"WARNING: May Cause Toe-Tapping."

Surf's Up
"In the coldest place on Earth, he's the hottest thing around."

Robots
"The Biggest Comedy Ever Assembled!"

Over the Hedge
"Taking back the neighborhood... One snack at a time."
Rio
"1 out of every 8 Americans is afraid of flying. Most of them don't have feathers."

Cloudy with a Chance of Meatballs
"Prepare to get served."
Bolt
"Fully Awesome. Ridonculous. Let It Begin."

Shrek the Third
"He’s in for the Royal Treatment."