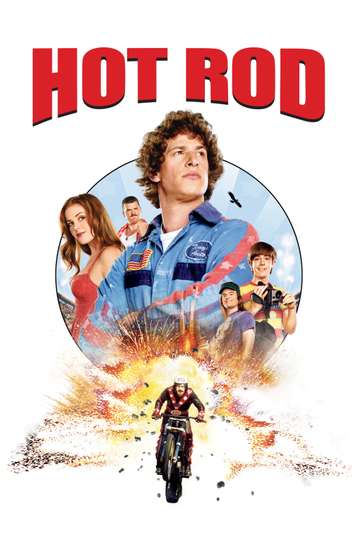 Want to watch 'Hot Rod' on your TV or mobile device at home? Hunting down a streaming service to buy, rent, download, or view the Akiva Schaffer-directed movie via subscription can be confusing, so we here at Moviefone want to do right by you.

Read on for a listing of streaming and cable services - including rental, purchase, and subscription alternatives - along with the availability of 'Hot Rod' on each platform when they are available. Now, before we get into all the details of how you can watch 'Hot Rod' right now, here are some finer points about the Paramount, Broadway Video, The Lonely Island, Michaels-Goldwyn comedy flick.

You probably already know what the movie's about, but just in case... Here's the plot: "For Rod Kimball, performing stunts is a way of life, even though he is rather accident-prone. Poor Rod cannot even get any respect from his stepfather, Frank, who beats him up in weekly sparring matches. When Frank falls ill, Rod devises his most outrageous stunt yet to raise money for Frank's operation -- and then Rod will kick Frank's butt."

DodgeBall: A True Underdog Story
"Grab life by the balls."
MacGruber
"He's the ultimate tool."
Step Brothers
"They grow up so fast."

Blades of Glory
"Kick Some Ice"
A Night at the Roxbury
"Score!"

Funny People
"George Simmons was prepared to die, but then a funny thing happened."
Pineapple Express
"Put this in your pipe and smoke it"
Get Him to the Greek
"Aaron Green has 72 hours to get a Rock Star from London to L.A. Pray for him."

Anchorman 2: The Legend Continues
"It's kind of a big deal"

Talladega Nights: The Ballad of Ricky Bobby
"The story of a man who could only count to #1."

Grandma's Boy
"A movie that proves you're never too old to come of age."

Anchorman: The Legend of Ron Burgundy
"They bring you the news so you don't have to get it yourself."
Role Models
"They're about to get more than they plea-bargained for."
Everything Must Go
"Lost is a good place to find yourself"
Southland Tales
"Have a nice apocalypse."
Cedar Rapids
"Today is the first day... of the rest of his weekend."

Old School
"All the fun of college, none of the education."