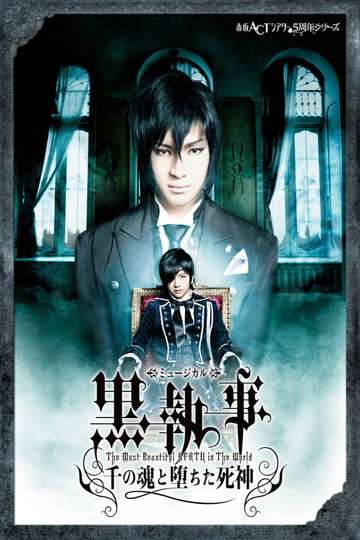 Kuroshitsuji: The Most Beautiful Death in the World

"Can death visit a Grim Reaper? Why can't the souls be collected? Alongside the sad and painful investigation is a Noir Fantasy in which the strings are pulled by the Black Butler."
TMDb Score
45
NR 2 hr 10 minMusic, Comedy, Mystery
England, the 19th Century. The almighty butler Sebastian of the Phantomhive House: the "evil nobles" that are contracted to perform Queen Victoria's "underground" work. His true form is that of a demon. According to his contract with his young Master Ciel, a proudly independent boy who faces his cursed fate head-on, he becomes Ciel's shadow and cleans up the incidents that occur in the underground society.
Show More
DirectorNobuhiro Mouri
StarringYuya MatsushitaYukito NishiiUehara Takuya
Movie DetailsWhere to WatchFull Cast & Crew

Original Language:English
Production Companies:Aniplex
Kuroshitsuji: The Most Beautiful Death in the World on the Web:Official Website
Movie Tags:musical