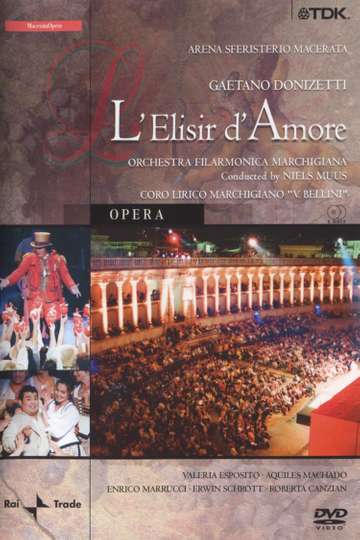 NR 2 hr 53 min
At the end of July 2002 the time had come again. An audience of 5000 had gathered to listen to the new production of Gaetano Donizetti’s L’elisir d’amore under the direction Saverio Marconi, conducted by Niels Muus. The orchestra was seated in an enormous box that was put on the stage, while the singers, in traditional costumes by Silvia Aymonino, performed on stage in front of it, among them the young Valeria Esposito as Adina, Aquiles Machado in the role of Nemorino, Enrico Marrucci as Belcore and the very young Erwin Schrott as Dulcamara.
Show More
DirectorSaverio Marconi
StarringValeria EspositoAquiles MachadoEnrico Marrucci
Full Cast & Crew