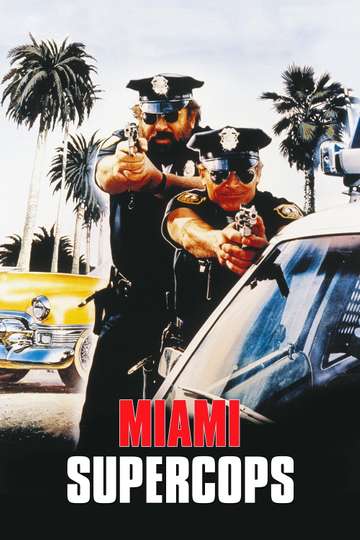 Yearning to watch 'Miami Supercops' on your TV or mobile device at home? Searching for a streaming service to buy, rent, download, or watch the Bruno Corbucci-directed movie via subscription can be a challenge, so we here at Moviefone want to do the work for you.

We've listed a number of streaming and cable services - including rental, purchase, and subscription alternatives - along with the availability of 'Miami Supercops' on each platform when they are available. Now, before we get into the fundamentals of how you can watch 'Miami Supercops' right now, here are some particulars about the Trans-Cinema TV, El Pico S.A. action flick.

Released , 'Miami Supercops' stars Terence Hill, Bud Spencer, C.B. Seay, William 'Bo' Jim The movie has a runtime of about 1 hr 35 min, and received a user score of 64 (out of 100) on TMDb, which assembled reviews from 342 top users.

Interested in knowing what the movie's about? Here's the plot: "In 1978, $20 million was stolen from a Detroit bank. One of the robbers was caught, one was found dead, and the third disappeared. The money was never found. Seven years later, the robber who was caught was released from jail. He immediately went to Miami, only to be found dead the next day. Now FBI agents Doug Bennet and Steve Forest have been called in to investigate the case while posing as Miami police officers. Somewhere in Miami the third robber is hiding with his $20 million, and he has a seven-year head start on the authorities." .

Who Finds a Friend Finds a Treasure
They Call Me Renegade
"You call me Trinity - they call me Renegade."
Even Angels Eat Beans
"Al Capone... Get lost! Dillinger... Phooey on you! Here come the funniest crooks since crime began!"
Why Did You Pick On Me?
The Sheriff and the Satellite Kid
Banana Joe
They Called Him Bulldozer
Double Trouble
God Forgives... I Don't!
"They call him PRETTY FACE! ...and his credo is simple and short and sweet!"
Super Fuzz
"Dave Speed is saving the world from crime... but who is saving the world from Dave Speed?"
Trinity Is Still My Name
"Trinity's back in the saddle again and still horsing around"
Troublemakers
"How The West was almost lost"
Go for It
Odds and Evens
"The most unlikely pair ever to take on the mob!"
The Two Missionaries
Aladdin
I'm for the Hippopotamus
All the Way Boys
Watch Out, We're Mad
Crime Busters
"Hill and Spencer! They're a pair of car-crashing, womanizing, rough-housing loudmouths... and they're the good guys!"
Bomber