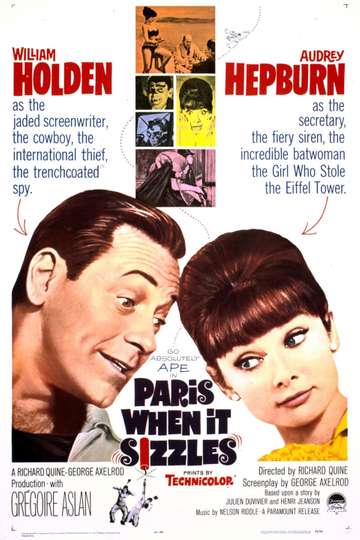 "Go absolutely Ape in..."
TMDb Score
64
NR 1 hr 50 minApr 8th, 1964Comedy, Romance
Hollywood producer Alexander Meyerheimer has hired drunken writer Richard Benson to write his latest movie. Benson has been holed up in a Paris apartment supposedly working on the script for months, but instead has spent the time living it up. Benson now has just two days to the deadline and thus hires a temporary secretary, Gabrielle Simpson, to help him complete it in time.
Show More
DirectorRichard Quine
StarringWilliam HoldenAudrey HepburnGrÃ©goire Aslan
Where to WatchFull Cast & CrewNewsBuy DVD

How to Steal a Million
A woman must steal a statue from a Paris museum to help conceal her fa...

Sabrina
Linus and David Larrabee are the two sons of a very wealthy family. Li...

Always
Pete Sandich is a reckless fire-fighting pilot who is killed in what w...

The Nun's Story
After leaving a wealthy Belgian family to become a nun, Sister Luke st...

Wait Until Dark
After a flight back home, Sam Hendrix returns with a doll he innocentl...

An American in Paris
Jerry Mulligan is an exuberant American expatriate in Paris trying to...