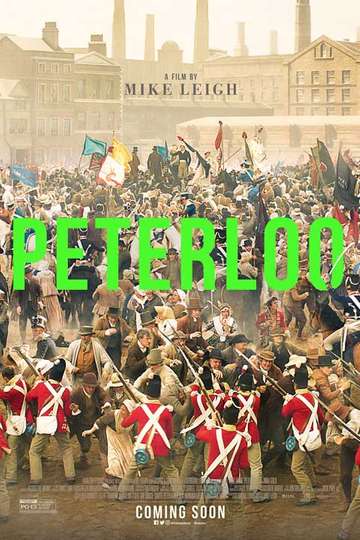 Fancy watching 'Peterloo' on your TV or mobile device at home? Discovering a streaming service to buy, rent, download, or view the Mike Leigh-directed movie via subscription can be challenging, so we here at Moviefone want to do the work for you.

Read on for a listing of streaming and cable services - including rental, purchase, and subscription options - along with the availability of 'Peterloo' on each platform when they are available. Now, before we get into the various whats and wheres of how you can watch 'Peterloo' right now, here are some specifics about the Film4 Productions, BFI, Thin Man Films, BFI Film Fund, Amazon Studios drama flick.

Released April 5th, 2019, 'Peterloo' stars Rory Kinnear, Maxine Peake, Pearce Quigley, David Moorst The PG-13 movie has a runtime of about 2 hr 34 min, and received a user score of 69 (out of 100) on TMDb, which compiled reviews from 108 knowledgeable users.

Want to know what the movie's about? Here's the plot: "An epic portrayal of the events surrounding the infamous 1819 Peterloo Massacre, where a peaceful pro-democracy rally at St Peter’s Field in Manchester turned into one of the bloodiest and most notorious episodes in British history. The massacre saw British government forces charge into a crowd of over 60,000 that had gathered to demand political reforms and protest against rising levels of poverty."

'Peterloo' is currently available to rent, purchase, or stream via subscription on Amazon Prime Video, .

Jessie Buckley’s Haunted in the New Trailer for ‘Men’