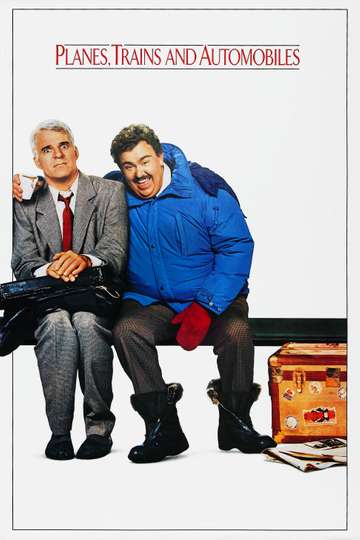 Fancy watching 'Planes, Trains and Automobiles' on your TV, phone, or tablet? Hunting down a streaming service to buy, rent, download, or view the John Hughes-directed movie via subscription can be a huge pain, so we here at Moviefone want to take the pressure off.

Read on for a listing of streaming and cable services - including rental, purchase, and subscription alternatives - along with the availability of 'Planes, Trains and Automobiles' on each platform when they are available. Now, before we get into all the details of how you can watch 'Planes, Trains and Automobiles' right now, here are some specifics about the Paramount, Hughes Entertainment comedy flick.

Released November 26th, 1987, 'Planes, Trains and Automobiles' stars Steve Martin, John Candy, Laila Robins, Michael McKean The R movie has a runtime of about 1 hr 33 min, and received a user score of 72 (out of 100) on TMDb, which assembled reviews from 1,463 top users.

You probably already know what the movie's about, but just in case... Here's the plot: "An irritable marketing executive, Neal Page, is heading home to Chicago for Thanksgiving when a number of delays force him to travel with a well meaning but overbearing shower ring curtain salesman, Del Griffith."

'Planes, Trains and Automobiles' is currently available to rent, purchase, or stream via subscription on Redbox, Plex, Tubi TV, and The Roku Channel .

National Lampoon's Vacation
"Every summer Chevy Chase takes his family on a little trip. This year he went too far."
Dumb and Dumber
"What the one doesn't have, the other is missing."
A Car's Life: Sparky's Big Adventure
Ratatoing
The Naked Gun: From the Files of Police Squad!
"You've read the ad, now see the movie!"
There's Something About Mary
"Love Is In The Hair."
Airplane!
"What's slower than a speeding bullet, and able to hit tall buildings at a single bound?"
The Jerk
"A rags to riches to rags story."
National Lampoon's Christmas Vacation
"Yule crack up."

Anchorman: The Legend of Ron Burgundy
"They bring you the news so you don't have to get it yourself."
Tommy Boy
"If at first you don't succeed, lower your standards."
Groundhog Day
"He’s having the worst day of his life … over, and over …"
What's Up: Balloon to the Rescue!
The Great Outdoors
"The wildlife is wild, but his brother-in-law in unbearable."