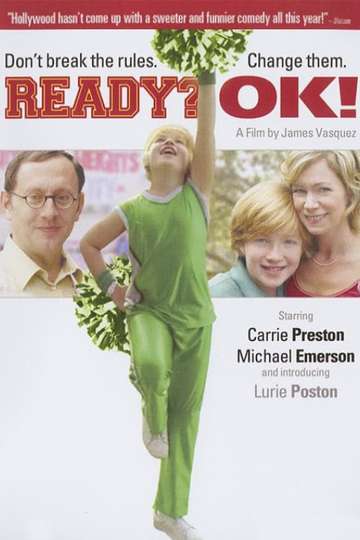 Need to watch 'Ready? OK!' in the comfort of your own home? Discovering a streaming service to buy, rent, download, or watch the James Vasquez-directed movie via subscription can be challenging, so we here at Moviefone want to help you out.

We've listed a number of streaming and cable services - including rental, purchase, and subscription choices - along with the availability of 'Ready? OK!' on each platform when they are available. Now, before we get into the fundamentals of how you can watch 'Ready? OK!' right now, here are some particulars about the family flick.

Released April 17th, 2008, 'Ready? OK!' stars Lurie Poston, Carrie Preston, Michael Emerson, Kali Rocha The NR movie has a runtime of about 1 hr 31 min, and received a user score of 68 (out of 100) on TMDb, which put together reviews from 6 respected users.

Want to know what the movie's about? Here's the plot: "When 10-year-old Joshua (Lurie Poston) decides to join the cheerleading squad at his Catholic school, he faces an uphill battle -- and opposition from his single mom, Andy (Carrie Preston), who struggles to understand her Hollywood musical- and pom-pom-loving son. With the help of sympathetic neighbor Charlie (Michael Emerson), Andy attempts to embrace her son for who he is, not who she wants him to be. James Vasquez directs this touching comedy."

'Ready? OK!' is currently available to rent, purchase, or stream via subscription on Tubi TV, and The Roku Channel .

Chip 'n Dale: Rescue Rangers
"It's not a reboot. It's a comeback."

Ciao Alberto
"They go together like pasta and pesto."