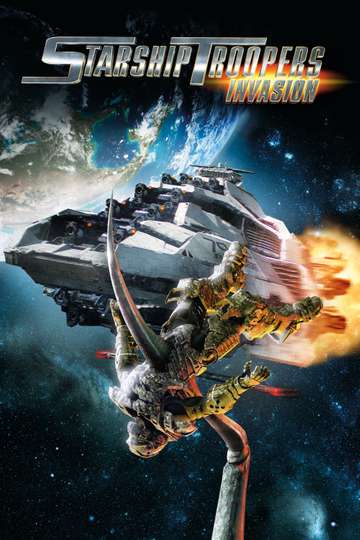 Yearning to watch 'Starship Troopers: Invasion' in the comfort of your own home? Searching for a streaming service to buy, rent, download, or watch the Shinji Aramaki-directed movie via subscription can be difficult, so we here at Moviefone want to do right by you.

Below, you'll find a number of top-tier streaming and cable services - including rental, purchase, and subscription alternatives - along with the availability of 'Starship Troopers: Invasion' on each platform when they are available. Now, before we get into all the details of how you can watch 'Starship Troopers: Invasion' right now, here are some details about the Stage 6 Films, Sola Digital Arts science fiction flick.

Released August 28th, 2012, 'Starship Troopers: Invasion' stars Luci Christian, Justin Doran, David Anthony Matranga, David Wald The R movie has a runtime of about 1 hr 29 min, and received a user score of 59 (out of 100) on TMDb, which collated reviews from 318 well-known users.

Curious to know what the movie's about? Here's the plot: "A distant Federation outpost Fort Casey comes under attack by bugs. The team on the fast attack ship Alesia is assigned to help the Starship John A. Warden stationed in Fort Casey evacuate along with the survivors and bring military intelligence safely back to Earth. Carl Jenkins, now ministry of Paranormal Warfare, takes the starship on a clandestine mission before its rendezvous with the Alesia and goes missing in the nebula. Now, the battle-hardened troopers are charged with a rescue mission that may lead to a much more sinister consequence than they ever could have imagined...."

Resident Evil: Retribution
"The Ultimate Battle Begins"
Total Recall
"They stole his mind, now he wants it back."
Starship Troopers 3: Marauder
"Do you have what it takes to be a Citizen?"
Priest
"The War is Eternal. His Mission is Just the Beginning."

AVP: Alien vs. Predator
"Whoever wins... We lose"

Superman Returns
"You’ll Believe A Man Can Fly Again!"
The Thing
"It's Not Human. Yet."

Terminator 3: Rise of the Machines
"The Machines Will Rise."
Jurassic Park III
"This time, it's not just a walk in the park!"
RoboCop 2
"He's back to protect the innocent."