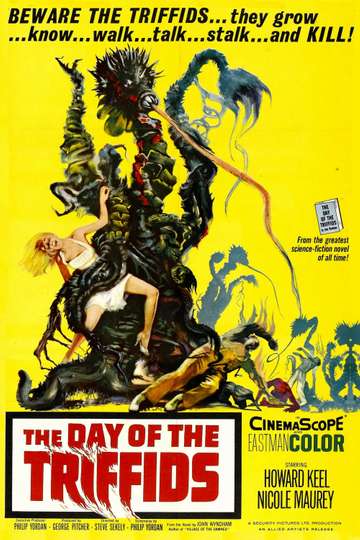 "Beware the triffids... they grow... know... walk... talk... stalk... and kill!"
TMDb Score
63
NR 1 hr 33 minApr 27th, 1963Horror, Thriller, Science Fiction
A shower of meteorites produces a rare night time spectacle that blinds anyone that looks at it. As it was such a beautiful sight, most people were watching, and as a consequence, 99% of the World's population go completely blind. In the original novel, this chaos results in the escape of Triffids: farmed plants harvested for their oils, which are capable of moving themselves around and are carnivorous. In this film version, however, the Triffids are not indigenous plants. Instead they are space aliens whose spores have arrived in this and an earlier meteor shower. Derided by the original novel's author, John Wyndham, for straying so far away from the source material.
Show More
DirectorSteve Sekely
StarringHoward KeelNicole MaureyJanette Scott
Where to WatchFull Cast & CrewBuy DVD

The Pit and the Pendulum
Francis Barnard goes to Spain, when he hears his sister Elizabeth has...

Little Shop of Horrors
Seymour Krelborn is a nerdy orphan working at Mushnik's, a flower shop...

Night of the Living Dead
A group of people try to survive an attack of bloodthirsty zombies whi...

Them!
As a result of nuclear testing, gigantic, ferocious mutant ants appea...

The Beast From 20,000 Fathoms
The controlled explosion of an atomic bomb in the Arctic Circle awaken...

The Abominable Dr. Phibes
Famous organist Anton Phibes is horribly disfigured in an automobile a...

Invasion of the Body Snatchers
A small-town doctor learns that the population of his community is bei...