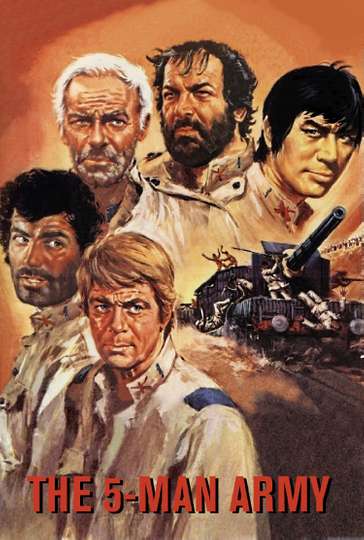 Looking to watch 'The Five Man Army' on your TV or mobile device at home? Tracking down a streaming service to buy, rent, download, or view the Don Taylor-directed movie via subscription can be confusing, so we here at Moviefone want to help you out.

We've listed a number of streaming and cable services - including rental, purchase, and subscription alternatives - along with the availability of 'The Five Man Army' on each platform when they are available. Now, before we get into the fundamentals of how you can watch 'The Five Man Army' right now, here are some details about the Tiger Film, Metro-Goldwyn-Mayer western flick.

Released February 20th, 1970, 'The Five Man Army' stars Peter Graves, James Daly, Bud Spencer, Nino Castelnuovo The movie has a runtime of about 1 hr 45 min, and received a user score of 67 (out of 100) on TMDb, which put together reviews from 31 top users.

What, so now you want to know what the movie's about? Here's the plot: "Set during the Mexican Revolution, a man known only as "The Dutchman" has a plan, and brings in four of his old acquaintences, including an old army buddy and a silent Japanese swordsman, to help him out by promising a $1000 reward if it succeeds. The plan turns out to be a fool's mission: rob a train carrying $500,000 in gold that's guarded by dozens of heavily armed soldiers and passes through a steady stream of military checkpoints. Naturally, his friends agree to go along with the scheme"

The Drover's Wife: The Legend of Molly Johnson

Murder at Yellowstone City
"In a town of suspects, one man stands accused."

Catch the Bullet
"The sun never sets on vengeance."

The World to Come

Concrete Cowboy
"You are who you ride with."

Prisoners of the Ghostland