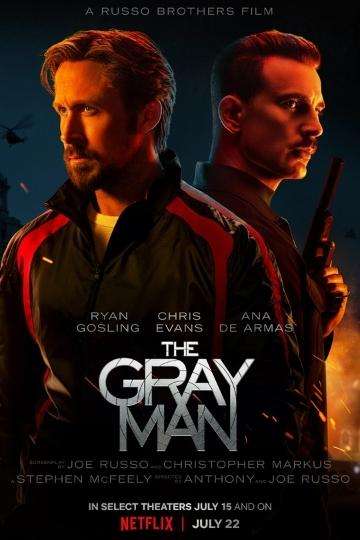 Yearning to watch 'The Gray Man' in the comfort of your own home? Searching for a streaming service to buy, rent, download, or view the Anthony Russo-directed movie via subscription can be a huge pain, so we here at Moviefone want to do the heavy lifting.

Read on for a listing of streaming and cable services - including rental, purchase, and subscription choices - along with the availability of 'The Gray Man' on each platform when they are available. Now, before we get into all the details of how you can watch 'The Gray Man' right now, here are some finer points about the Stillking Films, Roth-Kirschenbaum Films, AGBO adventure flick.

You probably already know what the movie's about, but just in case... Here's the plot: "The Gray Man is CIA operative Court Gentry (Ryan Gosling), aka, Sierra Six. Plucked from a federal penitentiary and recruited by his handler, Donald Fitzroy (Billy Bob Thornton), Gentry was once a highly-skilled, Agency-sanctioned merchant of death. But now the tables have turned and Six is the target, hunted across the globe by Lloyd Hansen (Chris Evans), a former cohort at the CIA, who will stop at nothing to take him out. Agent Dani Miranda (Ana de Armas) has his back. He’ll need it." .

Prey
"They hunt to live. It lives to hunt."
Persuasion
They Still Call Me Bruce
"I'm being chased by the meanest, nastiest, ugliest gang in town... But I'm not takin' any bull."

The Black Phone
"Never talk to strangers."
McEnroe
Joyride
Shut In
"The will to live is found within."

Not Okay
"Get famous or lie trying."
Pipa
Live is Life

Brian and Charles
"Some friendships are built to last."
Malnazidos