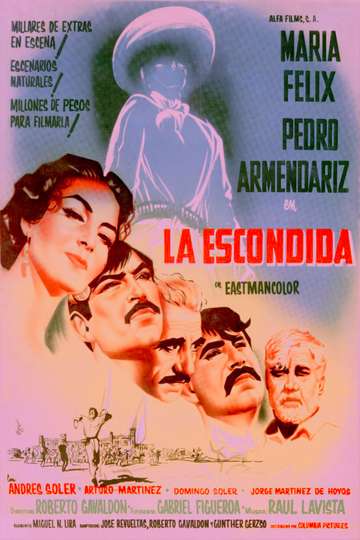 TMDb Score
55
NR 1 hr 40 minDrama, War, Western
Judging by the number of times it has shown up on Spanish-language cable TV, La escondida is one of the most popular and best beloved of the Maria Felix vehicles. The star runs the emotional gamut as Gabriela, who rises from the depths of poverty to the heights of Mexican society as a much-sought-after courtesan. Eventually, however, Gabriela proves that she is still true to her peasant heritage by casting her lot with the rebels in the 1916 Mexican civil war. Pedro Armendariz co-stars as Felipe, the charismatic rebel leader who wins Gabriela's heart - and inadvertently causes her downfall. La escondida is stunningly photographed by the late, great Gabriel Figueroa.
Show More
DirectorRoberto GavaldÃ³n
StarringMarÃ­a FÃ©lixPedro ArmendÃ¡rizAndrÃ©s Soler
Full Cast & Crew