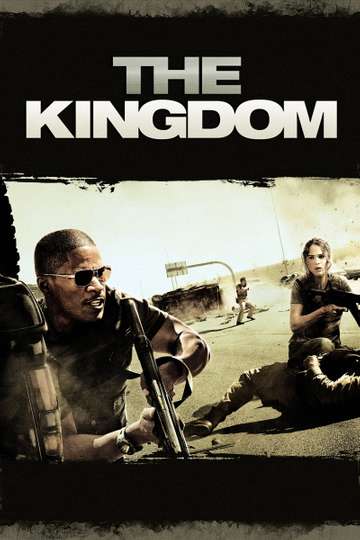 The Kingdom (2007)Stream and Watch Online Need to watch 'The Kingdom' on your TV or mobile device at home? Searching for a streaming service to buy, rent, download, or watch the Peter Berg-directed movie via subscription can be difficult, so we here at Moviefone want to do the work for you.

We've listed a number of streaming and cable services - including rental, purchase, and subscription choices - along with the availability of 'The Kingdom' on each platform. Now, before we get into the nitty-gritty of how you can watch 'The Kingdom' right now, here are some specifics about the Universal Pictures, Forward Pass, Relativity Media, FilmWorks, MDBF Zweite Filmgesellschaft drama flick.

Released August 22nd, 2007, 'The Kingdom' stars Jamie Foxx, Jennifer Garner, Chris Cooper, Jason Bateman The R movie has a runtime of about 1 hr 50 min, and received a user score of 67 (out of 100) on TMDb, which put together reviews from 1,171 experienced users.

Curious to know what the movie's about? Here's the plot: "A team of U.S. government agents is sent to investigate the bombing of an American facility in the Middle East."

G.I. Joe: The Rise of Cobra
From the Egyptian desert to deep below the polar ice caps, the elite G...

The Italian Job
Charlie Croker pulled off the crime of a lifetime. The one thing that...

The Hurt Locker
Forced to play a dangerous game of cat-and-mouse in the chaos of war,...

Body of Lies
The CIA’s hunt is on for the mastermind of a wave of terrorist attacks...

The Hoax
In what would cause a fantastic media frenzy, Clifford Irving sells hi...

Shooter
A marksman living in exile is coaxed back into action after learning o...

Live Free or Die Hard
John McClane is back and badder than ever, and this time he's working...