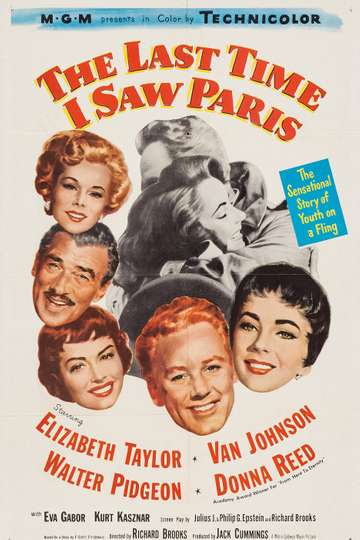 The Last Time I Saw Paris (1954)Stream and Watch Online

Want to watch 'The Last Time I Saw Paris' in the comfort of your own home? Discovering a streaming service to buy, rent, download, or view the Richard Brooks-directed movie via subscription can be tricky, so we here at Moviefone want to help you out.

Released November 18th, 1954, 'The Last Time I Saw Paris' stars Elizabeth Taylor, Van Johnson, Walter Pidgeon, Donna Reed The NR movie has a runtime of about 1 hr 56 min, and received a user score of 60 (out of 100) on TMDb, which assembled reviews from 36 respected users.

Interested in knowing what the movie's about? Here's the plot: "Charles returns to Paris to reminisce about the life he led in Paris after it was liberated. He worked on "Stars and Stripes" when he met Marion and Helen. He would marry and be happy staying in Paris after his discharge and working for a news organization. He would try to write his great novel and that would come between Charlie, his wife and his daughter"