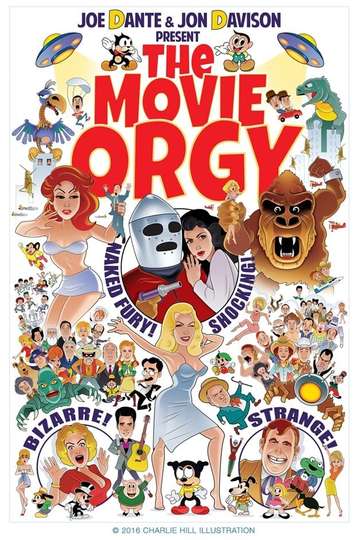 TMDb Score
35
NR 7 hrJan 1st, 1968Comedy
"The Movie Orgy" includes clips from television programs and B-movies of the 1950s and 1960s, as well as commercials, music clips, newsreels, blooper outtakes, satiric short films and promotional and government films. The effect is something like a simulation of a lazy Saturday of channel surfing or a long double (or triple) matinee at the movies. The film is primarily structured around extended clips from Attack of the 50 Foot Woman (1958) and Speed Crazy (1959); as it progresses, segments primarily culled from about a dozen other films and programs are increasingly intercut to create the effect of a single disjointed story in which numerous monsters and assorted social menaces seem to inflict themselves simultaneously on various American cities and towns. This principal focus is occasionally interrupted by commercial breaks and other assorted side features.
Show More
DirectorJoe Dante
StarringGoodman AceJane AceAnn-Margret
Movie DetailsFull Cast & CrewNews

'Gremlins 2' Is an Absurd, Enjoyable Exercise in Movie Chaos: Podcast

Reveling in the Glorious Absurdity of 'Jaws: The Revenge'