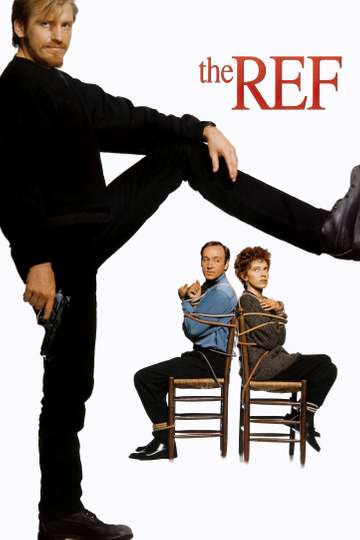 The Ref (1994)Stream and Watch Online

Looking to feast your eyes on 'The Ref' on your TV, phone, or tablet? Discovering a streaming service to buy, rent, download, or watch the Ted Demme-directed movie via subscription can be difficult, so we here at Moviefone want to do right by you.

We've listed a number of streaming and cable services - including rental, purchase, and subscription alternatives - along with the availability of 'The Ref' on each platform when they are available. Now, before we get into the fundamentals of how you can watch 'The Ref' right now, here are some details about the Touchstone Pictures, Don Simpson/Jerry Bruckheimer Films comedy flick.

Released March 9th, 1994, 'The Ref' stars Denis Leary, Judy Davis, Kevin Spacey, Glynis Johns The R movie has a runtime of about 1 hr 37 min, and received a user score of 65 (out of 100) on TMDb, which collated reviews from 265 experienced users.

Curious to know what the movie's about? Here's the plot: "Caroline and Lloyd are a married couple constantly at each other's throats, masters at crafting acid-tongued barbs at the other's expense. Indeed, they are so obsessed with belittling each other that they never stop -- not even at gunpoint. The gunman is Gus, a thief on the run from the police, who kidnaps the couple as an insurance policy, planning to use their home as a hideout. But their incessant bickering proves more than Gus bargained for, forcing him -- for the sake of his own sanity -- into the unenviable role of peacemaker. To make things even worse for Gus, he discovers that he has taken the couple hostage the night of their big Christmas party, and the guests are already on the way. Not wanting to leave Lloyd and Caroline unattended, Gus opts to attend the party, pretending to be the couple's marriage counselor. This naturally leads to a series of comic confusions, as the hostage crisis and marital tensions head towards their inevitable conclusion."

It's a Wonderful Life
"It's a wonderful laugh! It's a wonderful love!"
The Truman Show
"On the air. Unaware."
National Lampoon's Christmas Vacation
"Yule crack up."
The Usual Suspects
"Five Criminals. One Line Up. No Coincidence."