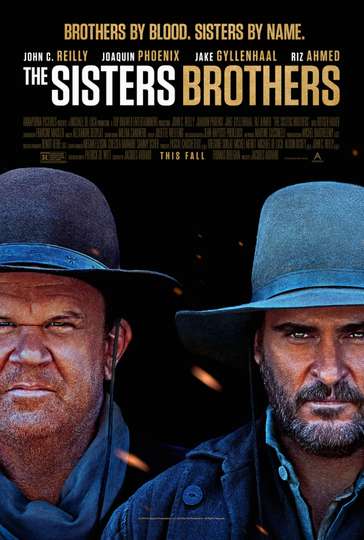 Want to watch 'The Sisters Brothers' on your TV or mobile device at home? Hunting down a streaming service to buy, rent, download, or view the Jacques Audiard-directed movie via subscription can be a huge pain, so we here at Moviefone want to help you out.

Read on for a listing of streaming and cable services - including rental, purchase, and subscription choices - along with the availability of 'The Sisters Brothers' on each platform when they are available. Now, before we get into the various whats and wheres of how you can watch 'The Sisters Brothers' right now, here are some details about the France 2 Cinéma, Canal+, UGC, France 3 Cinéma, Why Not Productions, Les Films du Fleuve, Mobra Films, France Télévisions, Michael De Luca Productions, Page 114, Casa Kafka Pictures, Wallimage, Annapurna Pictures, Atresmedia, Apache Films, Movistar+, KNM, Top Drawer Entertainment western flick.

Released October 19th, 2018, 'The Sisters Brothers' stars John C. Reilly, Joaquin Phoenix, Jake Gyllenhaal, Riz Ahmed The R movie has a runtime of about 2 hr 2 min, and received a user score of 68 (out of 100) on TMDb, which assembled reviews from 1,604 knowledgeable users.

You probably already know what the movie's about, but just in case... Here's the plot: "Oregon, 1851. Hermann Kermit Warm, a chemist and aspiring gold prospector, keeps a profitable secret that the Commodore wants to know, so he sends the Sisters brothers, two notorious assassins, to capture him on his way to California."

Cordelia
"The fear will find you"
Burning
"The truth is all in your head."

BlacKkKlansman
"Infiltrate hate."
The Trouble with You

First Man
"One giant leap into the unknown"

Widows
"Left with nothing. Capable of anything."
Mrs. Hyde
"A shy teacher by day. A dangerous creature at night?"
The Freshmen
The Old Man & the Gun
"This story is mostly true."

The Mule
"Nobody Runs Forever"
The Ballad of Buster Scruggs
"Stories live forever. People don't."
The Burnt Orange Heresy
"You can't paint over the truth."
Sink or Swim