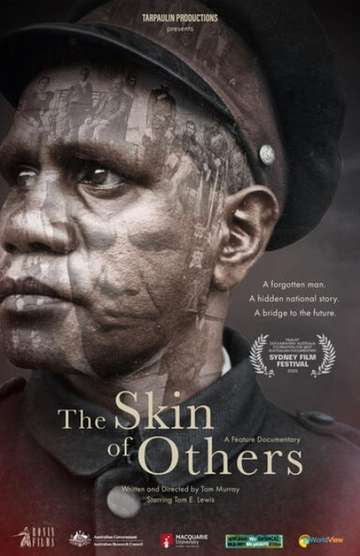 The Skin of Others

"A forgotten man. A hidden national story. A bridge to the future."
TMDb Score
40
NR 1 hr 31 minDocumentary
A compelling portrait of an extraordinary figure, Aboriginal WWI soldier Douglas Grant, featuring acclaimed Indigenous actor Balang Tom E. Lewis (in his final performance). Grant (c.1885-1951) was extraordinarily famous in his day, an intellectual, a journalist, a soldier, a reader of Shakespeare and a bagpipe player who could put on a fine Scottish accent. His life story connects Archduke Franz Ferdinand, Adolf Hitler, and Henry Lawson among other famous figures as he moved from Australia to Europe, UK and back. Lewis’s thoughtful and often playful reflections on Grant’s life, along with guest appearances from Max Cullen and Archie Roach, connect to the larger story of Australia’s tragic colonial history and its troubled relationship with First Australians.
Show More
DirectorTom Murray
StarringTom E. Lewis
Full Cast & Crew

Tom E. Lewis
as Self