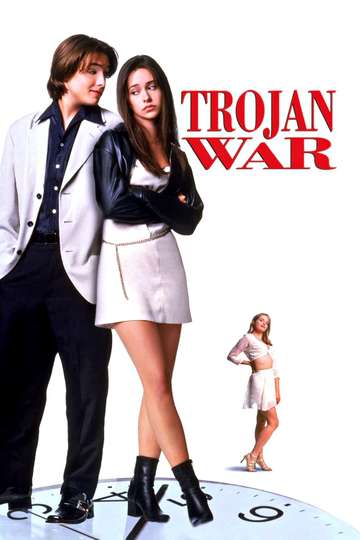 Want to behold the glory that is 'Trojan War' on your TV, phone, or tablet? Searching for a streaming service to buy, rent, download, or watch the George Huang-directed movie via subscription can be challenging, so we here at Moviefone want to do the work for you.

Below, you'll find a number of top-tier streaming and cable services - including rental, purchase, and subscription choices - along with the availability of 'Trojan War' on each platform when they are available. Now, before we get into the nitty-gritty of how you can watch 'Trojan War' right now, here are some particulars about the Warner Bros. Pictures, Daybreak Pictures comedy flick.

Released September 26th, 1997, 'Trojan War' stars Will Friedle, Jennifer Love Hewitt, Marley Shelton, Danny Masterson The PG-13 movie has a runtime of about 1 hr 25 min, and received a user score of 62 (out of 100) on TMDb, which compiled reviews from 105 well-known users.

You probably already know what the movie's about, but just in case... Here's the plot: "Brad is about to hook up with the girl of his dreams, but runs into a problem, no condom. So Brad sets out into the night to find one, running into many obstacles along the way, while not knowing his best friend, Leah is in love with him."

Skyfall
"Think on your sins."
Blitz
"It's cop-killer vs. killer-cop"
Can't Hardly Wait
"Yesterday's history. Tomorrow's the future. Tonight's the party."
Confessions of a Sociopathic Social Climber
"When you're at the top, the only way is down."
She's All That
"These two opposites attract... but EVERYONE'S trying to keep them apart!"

The Tuxedo
"Suit up for action!"

21 Jump Street
"They thought the streets were mean. Then they went back to high school."
Men in Black
"Protecting the Earth from the scum of the universe."

This Is the End
"Nothing ruins a party like the end of the world."

When in Rome
"Did you ever wish for the impossible?"