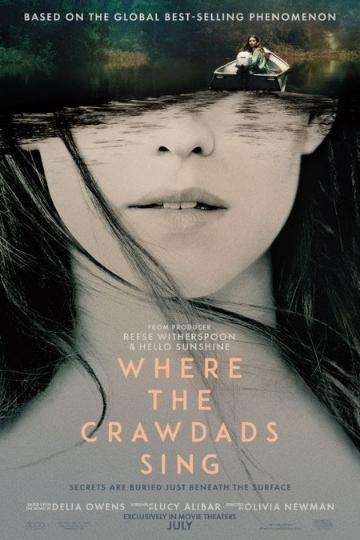 Where the Crawdads Sing (2022)Stream and Watch Online

Fancy watching 'Where the Crawdads Sing' in the comfort of your own home? Tracking down a streaming service to buy, rent, download, or watch the Olivia Newman-directed movie via subscription can be challenging, so we here at Moviefone want to do the work for you.

Read on for a listing of streaming and cable services - including rental, purchase, and subscription choices - along with the availability of 'Where the Crawdads Sing' on each platform when they are available. Now, before we get into all the details of how you can watch 'Where the Crawdads Sing' right now, here are some details about the Columbia Pictures, TSG Entertainment, Hello Sunshine, 3000 Pictures thriller flick.

Released July 15th, 2022, 'Where the Crawdads Sing' stars Daisy Edgar-Jones, Taylor John Smith, Harris Dickinson, Michael Hyatt The PG-13 movie has a runtime of about 2 hr 5 min, and received a user score of 76 (out of 100) on TMDb, which assembled reviews from 802 respected users.

Want to know what the movie's about? Here's the plot: "From the best-selling novel comes a captivating mystery. Where the Crawdads Sing tells the story of Kya, an abandoned girl who raised herself to adulthood in the dangerous marshlands of North Carolina. For years, rumors of the “Marsh Girl” haunted Barkley Cove, isolating the sharp and resilient Kya from her community. Drawn to two young men from town, Kya opens herself to a new and startling world; but when one of them is found dead, she is immediately cast by the community as the main suspect. As the case unfolds, the verdict as to what actually happened becomes increasingly unclear, threatening to reveal the many secrets that lay within the marsh."

'Where the Crawdads Sing' Release Dates

The Mitchells vs. the Machines
"Saving the world can be a trip."
My Butt Has a Fever

Elvis
"The Man. The Legend. The King of Rock & Roll."
The Spy Who Never Dies
"Spies are people too."
When Whales Walked: Journeys in Deep Time
The Making of Edward Scissorhands
The Letter
"Obsession can blur the lines of reality."
The Redeem Team
"Everything to lose. Everything to prove."
Bleed Out
"The American healthcare system just messed with the wrong filmmaker."
Graphic Sexual Horror

Three Thousand Years of Longing
"What would you wish for?"
From Devil’s Breath

Ticket to Paradise
"They’re in this together for better or worse."
Birds of Prey (and the Fantabulous Emancipation of One Harley Quinn)
"Mind Over Mayhem"

Nope
"What’s a bad miracle?"
Food Evolution
"Show me the Data"
Cover-Up
"If the lies don't kill you – the truth will."

Jerry & Marge Go Large
"It's never too late to risk it all."
Saving the Titanic
"Bravery Below Deck"