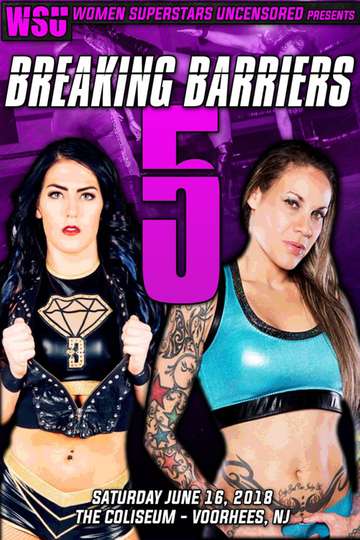 "WSU Breaking Barriers 5"
TMDb Score
80
PG 1 hr 43 minJun 16th, 2018Action, Drama
WSU returned on Saturday to present Breaking Barriers 5 from the Colossal Sports Academy at the Coliseum in Voorhees, NJ. The Premier Promotion in North American Women's Wrestling ushered in a new era at the event. In addition to the many new additions to the roster, ALL three championships were on the line. First, Maria Manic defended the WSU Tag Team Championships with an unlikely partner against unlikely opponents. Then, Kiera Hogan returned to defend the Spirit Championship against Jordynne Grace. Finally, the main event saw Mercedes Martinez defend the WSU World Championship against Tessa Blanchard. All this and so much more went down on Saturday at Breaking Barriers 5.
Show More
StarringTessa BlanchardJamine BenitezMadi Maxx
Full Cast & Crew