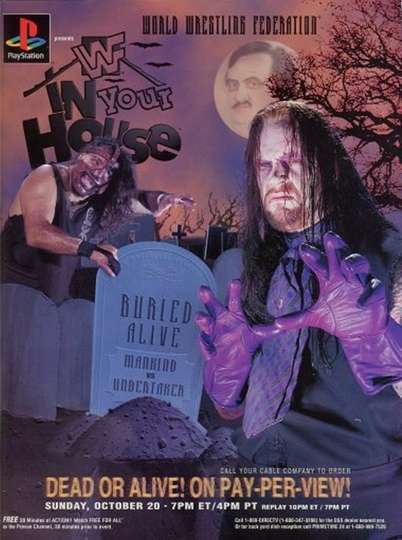 WWE In Your House 11: Buried Alive (1996)Stream and Watch Online

Looking to feast your eyes on 'WWE In Your House 11: Buried Alive' in the comfort of your own home? Searching for a streaming service to buy, rent, download, or view the Vince McMahon-directed movie via subscription can be tricky, so we here at Moviefone want to help you out.

Read on for a listing of streaming and cable services - including rental, purchase, and subscription options - along with the availability of 'WWE In Your House 11: Buried Alive' on each platform. Now, before we get into the nitty-gritty of how you can watch 'WWE In Your House 11: Buried Alive' right now, here are some particulars about the World Wrestling Entertainment (WWE) action flick.

Curious to know what the movie's about? Here's the plot: "In Your House: Buried Alive features The Undertaker vs Mankind a Buried Alive Match. Stone Cold Steve Austin vs Triple H. A #1 Contender Match featuring "Sycho" Sid vs. The Man They Call Vader and much more!"

'WWE In Your House 11: Buried Alive' is currently available to rent, purchase, or stream via subscription on WWE Network .