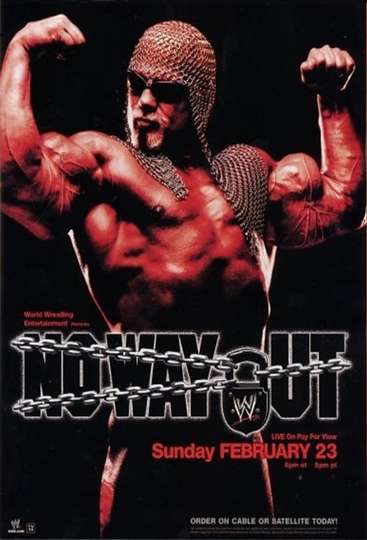 Need to watch 'WWE No Way Out 2003' on your TV or mobile device at home? Hunting down a streaming service to buy, rent, download, or view the Kevin Dunn-directed movie via subscription can be tricky, so we here at Moviefone want to take the pressure off.

We've listed a number of streaming and cable services - including rental, purchase, and subscription choices - along with the availability of 'WWE No Way Out 2003' on each platform. Now, before we get into all the details of how you can watch 'WWE No Way Out 2003' right now, here are some finer points about the World Wrestling Entertainment (WWE) action flick.

Released February 23rd, 2003, 'WWE No Way Out 2003' stars Paul Michael Lévesque, Scott Rechsteiner, Dwayne Johnson, Hulk Hogan The movie has a runtime of about 3 hr, and received a user score of 80 (out of 100) on TMDb, which put together reviews from 5 respected users.

Curious to know what the movie's about? Here's the plot: "No Way Out (2003) was the fourth annual (fifth overall) No Way Out PPV. It was presented by Starburst, took place on February 23, 2003 at the Bell Centre in Montreal, Quebec and starred the promotion's Raw and SmackDown! brands. The main event from the SmackDown! brand was a rematch from WrestleMania X8 between Hulk Hogan and The Rock. The main event from the Raw brand was a World Heavyweight Championship match between Triple H and Scott Steiner. The main match on the undercard from Raw, was the encounter of Steve Austin and Eric Bischoff, while the main match on the undercard from SmackDown! was a Six-man Tag Team match between the team of Team Angle (Kurt Angle, Charlie Haas, and Shelton Benjamin) and the team of Brock Lesnar, Edge, and Chris Benoit, where Edge was unable to participate in the match due to injury."

'WWE No Way Out 2003' is currently available to rent, purchase, or stream via subscription on WWE Network .