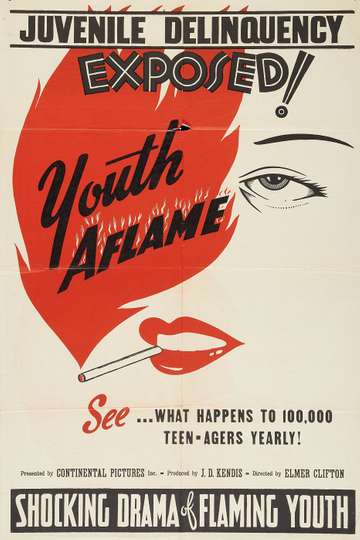 Watch on The Film Detective

"Thrill-mad! Without shame! Wanton and dangerous!"
TMDb Score
50
NR 1 hr 1 minOct 10th, 1944Drama
One of several WW II-era "juvenile delinquent" dramas, Youth Aflame was filmed two years before its 1945 release, and frankly looks much older. It's the old saw about two sisters, one good, one bad. The nice sister (Kay Morley) tries to steer the nasty one (Joy Reece) towards the straight and narrow path, but it's no use. Only when it's too late does the erring sister learn the horrible price of fast driving, hard drinking and uninhibited sex. And it's ALL HER PARENTS' FAULT!!!! Youth Aflame was reissued in 1959 as Hoodlum Girls, during Hollywood's next J.D.-movie cycle.
Show More
DirectorElmer Clifton
StarringJoy ReeseWarren BurrKay Morley
Where to WatchFull Cast & Crew