Moviefone speaks with Dermot Mulroney about his new thriller and working with Winona Ryder. “It felt like a reward to get a job with her again.”

Opening in theaters on July 15th is the new thriller ‘Gone in the Night’ from writer and director Eli Horowitz.

The movie stars Winona Ryder as Kath, who visits a remote cabin with her boyfriend (John Gallagher Jr.). They quickly discover that a mysterious younger couple (Owen Teague and Brianne Tju) are already staying there.

But when Kath’s boyfriend disappears with the younger woman, she becomes obsessed with finding an explanation and enlists the cabin’s owner (Dermot Mulroney) for help.

Moviefone recently spoke to Dermot Mulroney about his work on ‘Gone in the Night,’ as well as aging, and working with Winona Ryder and first-time director Eli Horowitz. 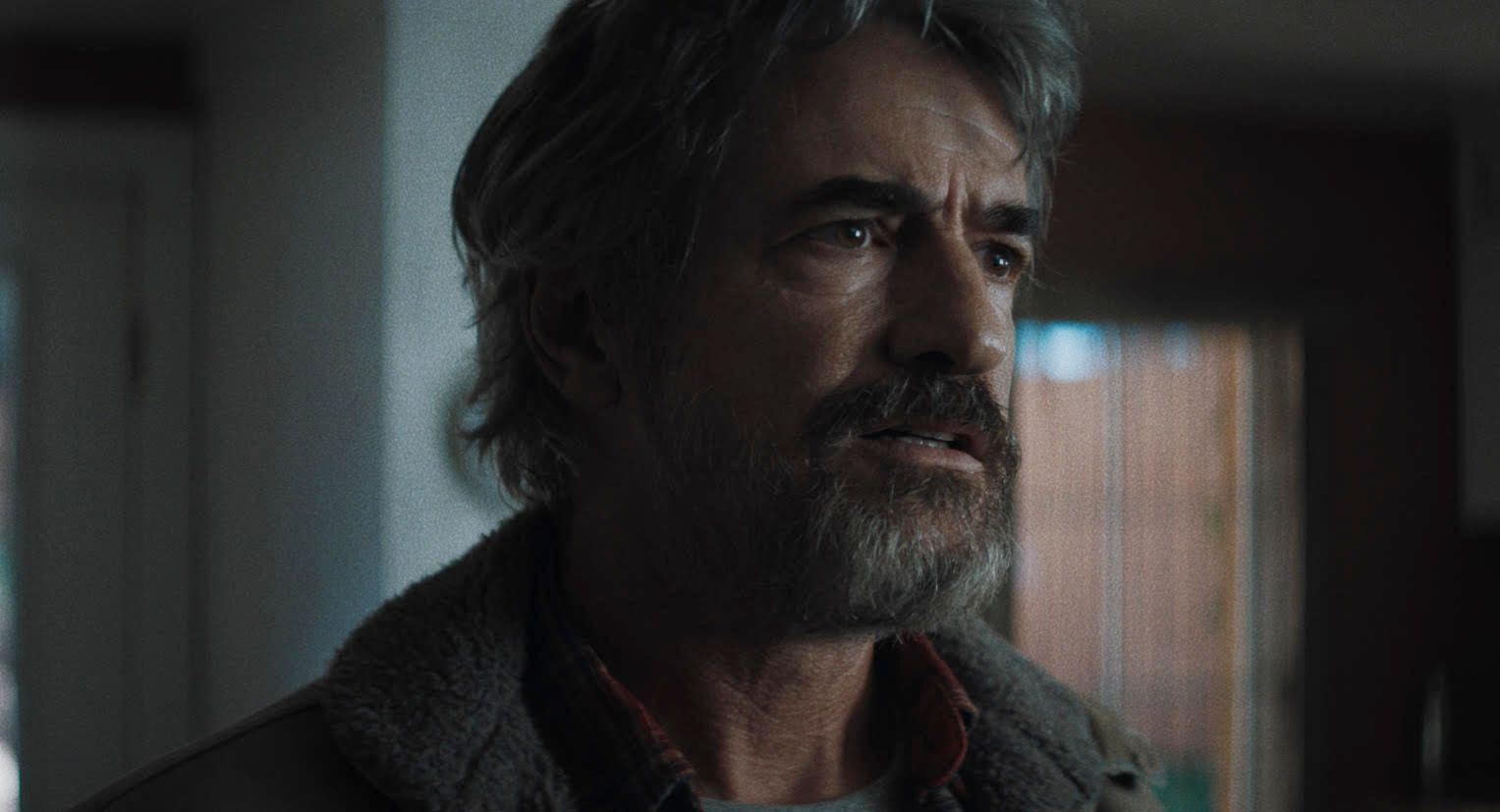 Dermot Mulroney in director Eli Horowitz's ‘Gone in the Night.'

You can read the full interview below or watch our interviews with Mulroney, John Gallagher Jr., Owen Teague, Brianne Tju, and writer/director Eli Horowitz by clicking on the video player above.

Moviefone: To begin with, what was your first reaction to reading the script?

Dermot Mulroney: Well, it reads great. Eli's one of the best writers. Of course, he's known for ‘Homecoming,’ which is a real brain-spinner too. So, it was really exciting just to get a script with his name on it. I was really excited to read it. Then even in the text that Eli sent me, he said, "Stay tuned. The character seems small at first."

So, he apologized that it wasn't very dominant in the screenplay at the beginning. But boy, does he ever pay off as a character. So, I was thrilled when I read the script. Of course, I knew Winona was already attached. So, it was a big thrill. In fact, I think I told her it felt like a reward to get a job with her again, and one of that quality.

MF: Can you talk about the movie’s themes of ageism and mortality?

DM: I never thought I was going to play the old guy. How's that? It's the first time I've had a line where I have to call myself that. And that is the purpose, that I'm a little older than the lead woman, Kath, that Winona plays. Then, below her in age, John Gallagher Jr. plays her boyfriend, and then, even below that, the other two actors are the youngest, in their young 20s. It's written that way on purpose, so that you can really dig deep on aging and dying from age.

Winona Ryder in director Eli Horowitz's ‘Gone in the Night.'

MF: Personally, how do you feel about aging?

DM: Well, there's a couple of things we know we're not supposed to do, and that's skateboard jumping. I was kind of looking forward to getting to be this age. I had an inkling that I'd be useful to the film community and that I'd have the opportunity to play really cool parts that would have more character. I don't know if I had that specific thought, but it's turning out to be like that in some ways. I certainly had the specific thought to stay around and be an actor right until the bitter end or until they kick me out.

Even as I'm aging, what age is, is changing. So, it's evolving. In other words, people my age a couple of decades ago were completely different people, in different conditions. So, part of my assignment in Hollywood, starting in the mid-'80s, was to be youthful because that was the moment when Hollywood was making teen movies for the first time ever. That went on for decades.

I think that's happening again now, where the leads are so young, but that's when I started. So, part of what I was meant to be was youthful onscreen. So, I can really relate, when it comes to this storyline. I've never pursued any anti-aging strategies at all and seem to be doing okay, but this film really strikes a chord that way with a lot of people.

DM: Well, I learned a lot from Eli. I learned that he wrote a book about ping-pong. He didn't know I was going to tell everybody about his history of ping-pong book, which, frankly, I should read. But that'll go to show you what kind of writer he is. He can come from any angle on anything. I talked to him a lot on the phone as we were preparing, because the script causes a lot of questions. That's deliberate. But I was just really struck by how super smart he is.

So, his answers are really well thought-out and available to him. Sometimes I have to scratch my head, and think, and then hope I get the right answer. With someone like Eli Horowitz, it seems like he's pretty much right. He was the best resource on this. Then, as we got to know each other better, we learned that we shared losses in the family that resonate into the story in a lot of ways. So, it was a pretty deep experience, making this movie.

MF: Finally, I understand that you shot in the Redwoods on a location that the director actually owns, so there was never a rush to get to the next location. How did that affect the experience of making this movie for you as an actor?

DM: He lives there and it's an amazing property. I think maybe he was staying somewhere else on the nights that we shot in that cabin. That's very much how tight-knit this group was, too. It's an amazing experience, shooting in close quarters, and in those woods, and with this sort of spine-tingling story. It was really fun to help create this movie.

Winona Ryder in director Eli Horowitz's ‘Gone in the Night.'

Gone in the Night