Female Filmmakers in Focus: Director Mary Lambert Talks About ‘A Castle For Christmas’

Welcome to Female Filmmakers in Focus, featuring recommendations for films directed by women to seek out each week. This week, Mary Lambert talks about her new holiday movie ‘A Castle For Christmas’ and recommends the early work of Jane Campion and Patty Jenkins.

A Castle for Christmas - directed by Mary Lambert 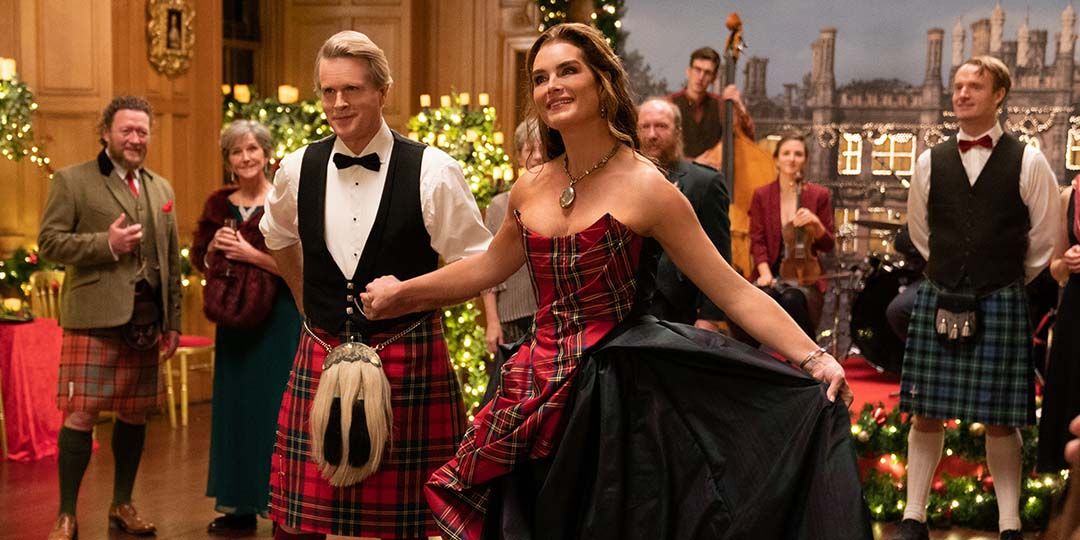 ‘A Castle For Christmas’ stars Brooke Shields as Sophie Brown, a wildly successful romance novelist who travels to Scotland after a disastrous appearance on a talk show. Reeling from a divorce, Brown killed off a fan favorite character and her readers - and publisher - are not happy. While in Scotland, she’s tasked with writing her next book, but instead visits the castle where her father lived as a child and slowly finds herself falling for its irascible owner, The Duke of Dunbar (Cary Elwes). A charming addition to the Christmas movie canon, fans of cozy holiday romances should get a cup of hot cocoa ready because they’re sure to fall head over heels themselves.

‘A Castle For Christmas’ is now streaming on Netflix.

A Castle for Christmas

Not Yet RatedNov 26th, 2021
Watch A Castle for Christmas Online

Mary Lambert spoke to Moviefone about her latest film.

Moviefone: How did you first get involved with making this Christmas movie?

Mary Lambert: I've got the opportunity to direct this because of my friendship and professional, you know, acquaintance with Brad Krevoy, who had brought me the script. I just really fell in love with it. I was super excited about the idea of working with Brooke Shields; she was already attached to it.

MF: I saw that the film is dedicated to your mother.

Lambert: My mother was very ill, and we knew she didn't have very long to live. You never know exactly what that means. Christmas was just a really important holiday for her. I realized when I read the script, and even more strongly when I was making the movie, that what an incredible gift my mother had given me with her joy. The joy of Christmas, my mother just had a lot of joy, and it really expressed itself. It really blossomed. It really overflowed sometimes more than anybody could even handle at Christmastime. She loved Christmas so much. It was a real expression of the joy that she had all year long. When I was making the movie, every day I realized what a gift that she had given me with the memories I had from Christmas. Mostly really simple memories of Christmas trees and Christmas cookies, and Christmas sweaters and family parties. I had lots of cousins, lots of cousins and had a really big, immediate family. She died in April, just as we were finishing the post-production. So she never got to see the movie. But Netflix, Christina Rogers, and Brad honored my request to dedicate it to her. Brad even suggested it, because he knew that I was going through the grief grieving process with my mother. He said, why don't we dedicate the movie to her. It was just such a perfect suggestion because as I said before, so many times during production I would be overwhelmed by my love for my mother and my family.

MF: Did you have any traditions growing up that you drew on for the film?

Lambert: Absolutely. My mother's mother, my grandmother, used to have a huge Christmas Eve party with all of her grandchildren. She had like 13 grandchildren, so there were a lot of us. And the big double door, she had a really old house, it wasn't particularly fancy, but it was big, and it was old. And she would shut the doors to the hall where you came in the front door. And we would all be in the living room and in the kitchen and in the dining room. We would have a big dinner. We had to wait till after dinner, and then she would open the doors to the entrance hall where the big giant Christmas tree was. All the presents for all of her grandchildren would be spread out like a Christmas fairy tale. Most of them were handmade. Everybody always got a sweater, or some hat or something that she had knitted for us. So the knitters were in the script already, but we definitely enhanced that. I threw myself into the knitters. I realized that the idea of knitting, making something for somebody else, but particularly knitting it, like every little stitch, you know, is a part of yourself. So I definitely drew on those memories from my grandmother and my great aunts.

MF: Could talk a little about working with Brooke Shields and Cary Elwes? They had such wonderful chemistry in this film.

Lambert: They're both incredible people and incredible actors. And they both really dedicated themselves to making these characters real, not just like, jokey or were you making a Christmas movie it doesn't matter. Every detail of the characters were important. Some actors don't particularly like to rehearse, but both Brooke and Cary really threw themselves into finding as much of the heart of these characters as we possibly could in the script. Plus, somewhere in Cary's past, there was a Duke in Scotland. He has Scottish ancestry. His mother's British, but he spent a lot of time in Scotland as a young man. He kind of is the Duke of Dunbar. He really brought this knowledge of what it would be like to be a contemporary man living with this heritage. Living with the weight, the glory and the wonder of it, but also the weight of this heritage. He really brought that depth to the role that I don't think another actor could have done, really. Brooke is just such a joy bug. She's like, as a person, she's always in the moment. When you're with Brooke, there’s like a shining light on you, because it's just coming from her. She's not always thinking about something else. She's there in the moment. She brought that aspect of her own personality to the part. She also has this incredible ability to just throw something back at you. She's an athlete, you know, and if you say something to her, she just catches it, and then she throws it right back to you. She brought that sort of spontaneity and freedom to the role. Cary was the more introverted, the Duke who isn't able to be spontaneous. And it just worked. Because they both just embrace your characters, and they were always just lobbing that ball back and forth.

MF: What was the location shooting in Scotland like?

Lambert: One of the things we had to do, because of the Covid protocols, was to choose one location and stay there. I had so much fun location scouting. We went to every castle within 100 miles of Edinburgh. They were like aren't you tired of location scouting? And like, no, I can't believe I'm being paid to do this. I would come over here and do this for two weeks as a tourist, this is incredible. But initially, I wanted to find the best staircase, the best dining room, the best ballroom, and then put them all together, and you know, move from one to the other, as if it were one castle. But we couldn't do that. So we had to narrow it down to one property. We ended up on the Dalmeny Estate near Edinburgh, which is still inhabited by the people who've lived there for like 300 years, 400 years. People really do live in these castles that have been in the family for 300 or 400 years. Maybe it changed hands 350 years ago, but you know, it's 600 years old, but we've only been here for 300 years, it's kind of like that. We had these people that lived in the castle as our sort of role models for the duke. So we chose the Dalmeny Estate because it was a very old castle. Barnbougle Castle is right there on the shore. I think it is 600 years old, it goes back to the 1400s. At a certain point, they decided they wanted to modernize, so they built a much bigger estate further inland. It’s a much bigger house. More of a manor house than a castle, actually. So we used them both. We put them together. We used some of the beautiful old rooms in Barnbougle to look really very castle-y. Then we used the exterior of Dalmeny house as our exterior because it was so big. Some of the older castles are really not that big. They were built as keeps. So the walls are eight feet thick, but they want to defend the smallest possible space.

MF: Could you recommend another film directed by a woman readers should seek out?

Lambert: I mean, the films of Jane Campion are amazing. Her first film, ‘Sweetie.’ I don't know that it’s ever gotten as much love as it should. And Patty Jenkins. She's my dear friend. If you haven't seen the ‘Wonder Woman’ movies, you should see them. But her first film, ‘Monster’ is a terrifying movie. Don't see it if you're easily frightened. It garnered an Academy Award for Charlize Theron. It kind of made Charlize Theron. I would say, ‘Sweetie’ and ‘Monster’ if we're looking for movies that maybe you haven't seen or haven't gotten a lot of press. My sisters! We've been making movies. People didn't always go see them.

Trailblazer New Zealand filmmaker Jane Campion was nominated for Best Director at the Academy Awards for her 1993 film ‘The Piano,’ for which she became the first woman to receive the Palme d'Or award at the Cannes Film Festival. Her first feature film ‘Sweetie’ played at the 1989 Cannes Film Festival and was later released by the Criterion Collection along with three of her early shorts ‘An Exercise in Discipline: Peel’, ‘Passionless Moments’, and ‘A Girl’s Own Story’. Known for her frank depictions of sex and gender dynamics, ‘Sweetie’ stars Karen Colston as Kay, a young woman in her twenties coming into her sexuality while also dealing with her chaotic sister Sweetie (Geneviève Lemon), and the contention relationships they both have with everyone around them.

Born in Victorville, California, Patty Jenkins moved around a lot during her childhood due to her father’s military career. She received her undergraduate degree from The Cooper Union and a master’s degree in directing from the American Film Institute. Her first short film was a superhero film inspired by the style of Pedro Almodóvar. Her feature film debut ‘Monster’, which was inspired by the real-life story of serial killer Aileen Wuornos, premiered at the 54th Berlin International Film Festival, where Charlize Theron won the Silver Bear for Best Actress. ‘Monster’ was a commercial and critical success, making $64.2 million on an $8 million budget. For her complex portrayal of Wuornos, Theron received many awards and nominations, eventually winning the Oscar for Best Actress.