What Gets Hinted At In 'Eternals,' And How Will The MCU Be Affected?

With Marvel's 'Eternals' now on Disney+, here are some theories about what the future holds for the MCU. 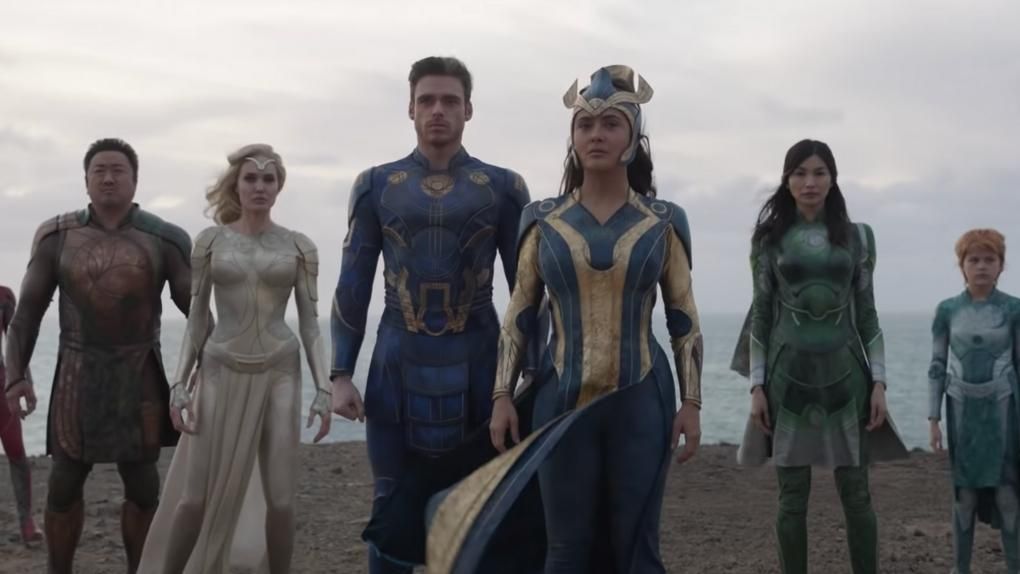 ‘Eternals’ has come to Disney+, and once again the MCU has been left with so many more questions and honestly, little to no new answers! But that doesn’t mean we can’t take what this behemoth (and I’m not talking about the Celestials!) of a movie has brought into the MCU, and look at the clues of the recent editions, like the MCU television shows and Shang-Chi. Maybe we can just try and see where the MCU is going?

Beware! Spoilers ahead for a multitude of MCU properties, including the Disney+ shows and the recent Eternals!
Because let’s be real; if these predictions end up coming true, you can’t say we didn’t warn you!

Eternals and the Celestial in the sea.

So, 'Eternals' was a very interesting film for the MCU. While other properties such as Guardians of the Galaxy have welcomed viewers into the cosmic side of the Marvel universe, 'Eternals' literally slingshotted us into the deep end-especially with the introduction of Celestials. Known as the most powerful beings in the galaxy, the Celestials are the literal cause of all known life. Destroying and making life whenever one is born. Obviously, the Eternals stopped the celestial Tiamut from popping out of his cosmic egg, but now Earth knows of them. Since, you know, one is frozen in the ocean.

Looking into the comics, Tiamut is not just a name chosen at random. It is a Celestial with deep ties to both the Eternals… and the X-Men. Appearing in both series, and the Eternals, in some runs of the comic, have been the creators of the X gene-it’s easy to assume that the Celestial might be brought up related to the mutant team. Making it an easy case for the X-Men to study how the gene was created. With Disney recently buying up 20th Century Fox, the owners of the X-Men license, now that idea of the X-Men joining the MCU is closer than ever.

'Eternals,' like every other marvel film, ends with two after credits scenes. We’ll start with the first one. Thena, Druig and Makkari are floating in space, surprised that they cannot get a hold of the Eternals left on earth… until a portal that resembles the rainbow bridge opens to reveal... Pip? Voiced by Patton Oswalt? To which the troll reveals… Harry Styles!? Yeah, so let’s break this down. Who Pip introduced was Eros, or Starfox. And he is indeed Thanos brother! While it was hinted for forever that Styles was joining the MCU, we had some clue who he was playing, now we know, and the rumors were true! But what does Starfox mean?

While I hate to say more cosmic stuff… but it’s more cosmic stuff. This does confirm that the MCU could be going with the comic book lore that Thanos is/was indeed an Eternal. As Starfox is as well. But who is the mad titan’s brother? Well, he’s the opposite of Thanos, that’s for sure. A womanizer and playboy, Eros literally took on the name for his… passion for women. Yeah, totally not like Thanos. Though, he toughened up and even helped the Avengers stop his brother when he found out Thanos had murdered their family and planet. Sadly, even his background doesn’t help us in giving a solid answer what his reveal could mean for the MCU.

We can theorize-mostly on the idea that he knew where the other Eternals were after Arishem captured them. Which confirms the group's idea that other Eternals in the galaxy knew why they were created. Could this mean a domino effect? Of other Eternals destroying the Celestials, or maybe find out they can? Are there Eternals that have killed their creators with no issue? It would explain why Starfox is just able to freely travel with no one stopping him.

What Starfox also could mean is another idea that Marvel decided to drop on us in a little Disney+ show called Loki—the multiverse. With every new reveal as big as Starfox, we need to keep in mind this character could have maybe shown up via the creation of the endless universes. Could he have crossed over? If any characters could even have the power to do so—we’d think it was the Eternals.
But from Starfox and onto something that has blown up—with just a voice.

Yes, that was Blade!

In the Eternals second after credits scene, we see Sersei’s main squeeze Dane Whitman standing over a box, with his family crest. His humming and hawing over whether to open it, and when he does, it talks to him; it’s a sword. At the near touch of the blade, we see what looks like moving darkness following his presence. Then, as he goes to touch it, we hear “Sure you're ready for that, Mr. Whitman?”

Okay, let’s be real. When I first saw the film, I thought that was Nick Fury! We’re building a new team! But then director Chloe Zhao revealed in an interview that the voice we heard was the first MCU appearance (kinda!) of Mahershala Ali as Blade! The day walker vampire hunter and a major supernatural presence in the comics. But… why him?

Well, like a lot of side characters in the MCU, Dane Whitman is the Black Knight. A marvel hero who wields the Ebony Blade, a mystical sword that while allowing the user to be a badass, also causes intense bloodlust the more that blood is spilled.

Hmm… mystical sword with supernatural powers? And Blade is a supernatural entity who specifically goes after supernatural creatures that are going after humans? Obviously, these things write themselves. And, well, that’s most likely the real explanation. But let’s get a bit deeper. In the comics, Blade and the Black Knight are a part of the same team at one point called M19, Britain’s version of the Avengers. While the first theory seems the most plausible (and would give Dane Whitman another movie to show up in) the M19 theory allows for Marvel to branch out—maybe another Disney+ show?

And there you have it! Just a few theories and ideas on where the MCU would be going with just the little reveals that were give to us in the recent Eternals! Did we match up to your predictions? Or do you have anymore? Let us know!