‘Ambulance’ is a Fun Joyride That Ultimately Runs Out of Gas 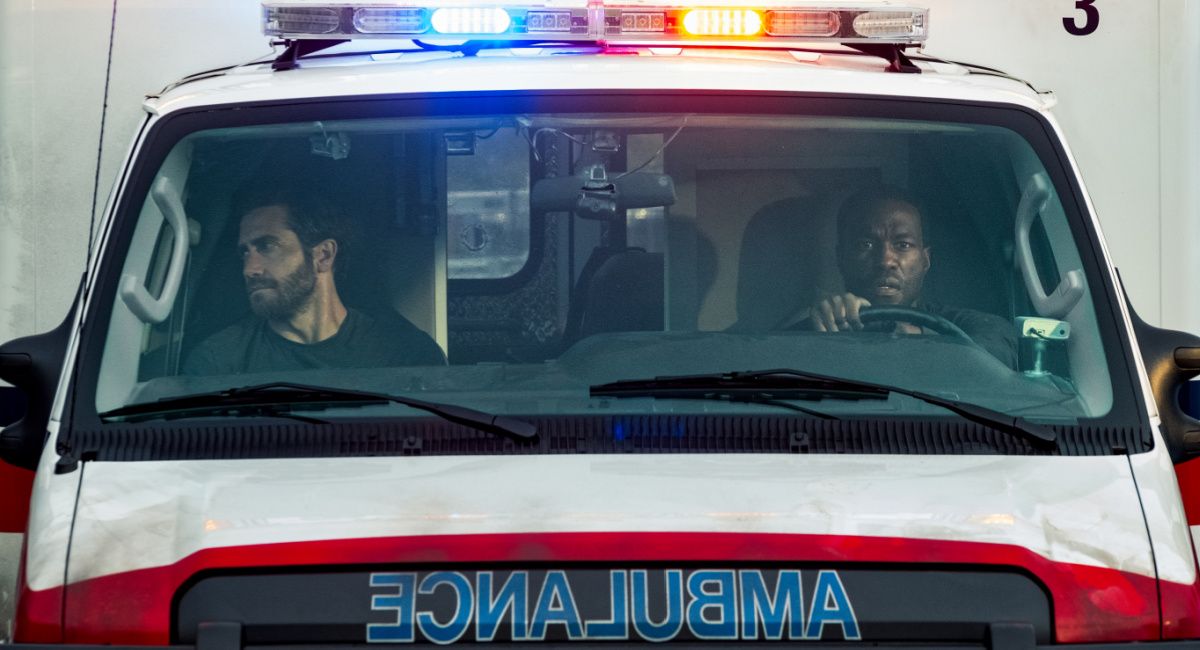 The result is Michael Bay’s version of a mash-up between ‘Heat’ and ‘Speed,’ which is mostly entertaining and features impressive performances from Gyllenhaal and Gonzalez, but ultimately falls flat before it reaches the finish line.

The movie begins by introducing us to Will Sharp (Abdul-Mateen II), a war veteran with a small child who is desperate to find money for his wife’s upcoming surgery. With insurance companies reusing to help, he turns to his adopted brother Danny (Gyllenhaal), who is a life-long criminal. Danny agrees to give Will the money, if he helps him with a bank heist that is about to go down with a possible take home over $32 million. Will reluctantly agrees, but the heist goes terribly wrong.

The Special Investigation Section of the LAPD led by Captain Monroe (Garret Dillahunt) are on to Danny and waiting for him and his crew when they leave the bank. After a street shootout with the cops, which leaves their entire crew dead, Danny and Will make their escape by hijacking an ambulance with EMT Cam Thompson (Gonzalez) and a wounded policeman (Jackson White) on board.

Now, with the entire LAPD chasing them through downtown Los Angeles, Danny starts to become unhinged, and Will contemplates how he can get himself out of this situation, while Thompson tries to keep her patient alive. Danny then enacts a dangerous plan to escape, and Will must decide between helping his brother or doing the right thing and ending this horrible ordeal.

Whether you like his movies or not, you must respect Michael Bay as a master director. Bay makes movies on the biggest scale possible, and I’d put him in the same category with filmmakers like James Cameron and Zack Snyder. In some ways, ‘Ambulance’ is the most entertaining and fun movie that Bay has delivered in years and has all of the big action sequences you would expect from the director.

But it also contains a lot of the “Bay-isms” that have plagued his films over the years, like an unbelievably ridiculous plot, characters that only make smart decisions when the script calls for it and putting action above character development.

The filmmaker also makes more than a few meta references to his own films, which seemed strange and takes you right out of the movie. For example, two police officers’ bond over a scene from Bay’s ‘The Rock,’ and later compare themselves to the characters in ‘Bad Boys.’ The references were probably added as fun Easter eggs, but I found them to be unnecessary and a distraction from the rest of the movie.

Yahya Abdul-Mateen II is an amazingly talented actor and I’ve really enjoyed him in films like ‘Aquaman,’ ‘The Matrix Resurrections’ and ‘The Trial of the Chicago 7,’ as well as the HBO mini-series ‘Watchmen.’ But unfortunately, his performance in ‘Ambulance’ does not work for me.

He is introduced as our hero but immediately agrees to rob a bank with his brother, and even though we know that he is doing it to save his wife, he still makes some terrible decisions and causes several crimes. The film wants to wash away his involvement in the bank robbery by the end, so that the character of Will can be the true hero of the movie, but at that point it was too late for me to be able to root for him.

Who you do root for in this movie is Eliza Gonzalez’s Cam, who is the true hero of the story and frankly, I would have loved to see a film about just her working as an EMT. She is definitely the breakout star of the movie and is great opposite Gyllenhaal and his frantic energy. The actress does her best to ground the film in some sort of reality, which is no small task considering the outlandishness of the plot.

Jake Gyllenhaal gives a fantastic performance as Danny Sharp, channeling all the crazy energy of Nicolas Cage in ‘Face/Off.’ Gyllenhaal is completely over-the-top, but it works within the parameters of what Bay has created. Again, the problem for me is that I didn’t know who to root for. Danny is clearly the bad guy, but Gyllenhaal is so charismatic compared to Abdul-Mateen II that it’s hard not root for him instead.

Several supporting actors give strong performances, the best coming from Garret Dillahunt who plays police Captain Monroe. Dillahunt is a “that guy” actor and has appeared in countless TV and film projects, so you will recognize him instantly. In a ‘Heat’ analogy, he plays the Al Pacino to Gyllenhaal’s Robert De Niro. Dillahunt has an interesting approach to playing his role that works really well, but unfortunately the character is not given enough screen time.

The same could be said for Keir O’Donnell who gives a very interesting performance as an FBI agent who is also a former friend of Danny Sharp. There is a bit of back and forth between the two characters, but with such an interesting backstory and relationship, again, I wish more time had been invested with this character.

The bank shootout at the beginning of the film is really well choreographed and looks great on screen, but it doesn’t add anything that we didn’t see in Michael Mann’s classic ‘Heat.’ The same can be said for the ambulance chase sequences, which have Bay’s fingerprints all over it, but again, do not add anything that we couldn’t see from watching ‘Speed.’

And if I were to make a ‘Speed’ analogy with this film, I would say that Eliza Gonzalez is really playing the Keanu Reeves role, with Yahya Abdul-Mateen II as Sandra Bullock’s character and Jake Gyllenhaal in the Dennis Hopper part.

In the end, ‘Ambulance’ is a fun and entertaining movie that just leaves you a little empty by its conclusion.

‘Ambulance’ receives 3 out of 5 stars.

Disney’s ‘Strange World’ Teaser Takes Us To a New Vista