Chris Evans gives a strong voice performance as the title character, channeling his best Tim Allen, but is upstaged by the breakout star, Sox the Cat! 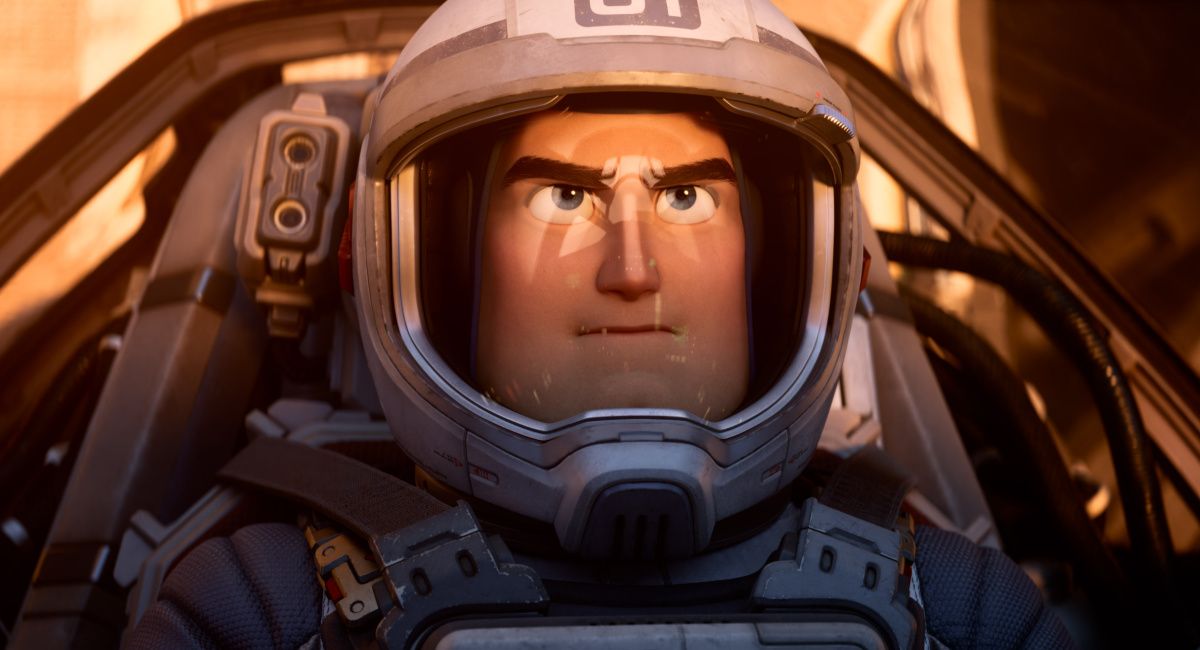 Directed by Angus MacLane (‘Finding Dory’), the new movie is a representation of the in-world blockbuster film that inspired the Buzz Lightyear toy Andy played with in the ‘Toy Story’ franchise, and stars Chris Evans (‘Avengers: Infinity War’) as the voice of Buzz Lightyear.

In addition to Evans, the voice cast also includes Keke Palmer, Peter Sohn, Uzo Aduba, James Brolin, Dale Soules, and Taika Waititi. The result is a fun movie that doesn’t recapture the magic of the ‘Toy Story’ franchise but is still an entertaining animated adventure.

The film begins by introducing us to Buzz Lightyear (Evans), a Space Ranger exploring a new planet with his commanding officer Alisha Hawthorne (Aduba). When danger strikes, Buzz does his best to save his spaceship full of civilians and escape the planet but they are ultimately marooned. Blaming himself, Buzz and Alisha work with the survivors to build a new civilization on the strange planet and rebuild their spacecraft so they can go home.

However, when Buzz tests the new ship he realizes that every time he attempts to leave the planet, he is thrusted into the future by four years. Refusing to fail, Buzz attempts to leave again dozens of times, until eventually, Alisha grows old and dies. After Buzz’s latest attempt, he realizes the planet has been invaded by the evil Emperor Zurg (Brolin). Now, Buzz must team-up with Alisha’s granddaughter Izzy (Palmer), Mo Morrison (Waititi), Darby Steel (Soules), and a robotic cat named Sox (Sohn) and learn to work together in order to defeat Zurg and free the planet forever.

As a standalone Pixar animated adventure, ‘Lightyear’ completely soars, but is undermined by the filmmakers’ choice to shoehorn it into the ‘Toy Story’ franchise. The film opens with a title card that explains ‘Lightyear’ is the in-world movie that inspired the Buzz Lightyear toy, which Andy played with in the original ‘Toy Story’ movies. The idea that this movie is Andy’s ‘Star Wars’ or even ‘Independence Day’ is laughable, and it’s hard to see how young Andy would fall in love with this movie.

Another question that arises from making ‘Lightyear’ the movie that inspired the Buzz Lightyear toy is why doesn’t the character in the “movie” sound like the toy? Typically, when a voice-activated toy is release from a movie, that toy has the voice of the actor that played him in the movie. So, why isn’t Tim Allen the voice of the real Buzz Lightyear? Also, since ‘Lightyear’ is the movie the toy is based on, it means Chris Evans wasn’t actually playing Buzz, he was really playing an actor playing the title character. Best not to think about that one too much.

That being said, whoever Evans is actually playing, he does a great job of making the role his own, while honoring what Tim Allen did before him. It’s also clever casting because there are a lot of similarities between Buzz and Evans’ signature character, Steve Rogers/Captain America. Both characters are government heroes, lost in time, just trying to get home to their loved ones. There is also a comparison to be made to his “Old Man Steve" character from ‘Avengers: Endgame,’ but to talk too much about that would give away spoilers.

An overall issue I’ve had with Pixar in the past is that they come up with great concepts, and then abandon them halfway through to introduce a cute character that will sell a lot of merchandise. ‘Soul’ is a great example of that, with a truly original concept, but then introducing an adorable cat halfway through. So, I was skeptical when Sox (voiced by Peter Sohn) was introduced about 30min into ‘Lightyear.’ However, I’m happy to say that Sox really works and is a great addition to the story. Yes, it’s another example of Pixar adding a cute animal to its cast, but it doesn’t feel out of place at all and the character definitely steals every scene he’s in.

Rounding out the supporting cast are some really lovely performances from Uzo Aduba and Keke Palmer, as Commander Alisha and her granddaughter Izzy, respectively, who are really the emotional core of the movie. Taika Waititi and Dale Soules are also scene stealers with their wonderful characters of Mo and Darby, who bring the funny with their off-the-wall performances.

James Brolin is fine as the voice of Emperor Zurg, but it’s the characters final reveal that bothers me. Again, to say too much would lead to spoilers, but let’s just say that I saw the film’s big twist coming from a million lightyears away. It’s an interesting idea, but I feel like we’ve seen that twist before and it doesn’t lead to the ‘Empire Strikes Back’ moment that was probably intended. The reveal also puts the integrity of the movie’s lead character in jeopardy.

Don’t get me wrong, ‘Lightyear’ is a really fun and exciting adventure movie, with beautiful animation and a cast of really interesting characters, but in the end, suffers from its desire to remind you its set in the ‘Toy Story’ universe.

‘Lightyear’ receives 4 out of 5 stars.