More of a Psychological Thriller than a Horror Movie, ‘Umma’ Still Delivers Some Good Scares and a Strong Performance from Sandra Oh.

Director Iris K. Shim impressively crafts a personal tale that is certainly suspenseful but gets bogged down by unnecessary genre tropes. 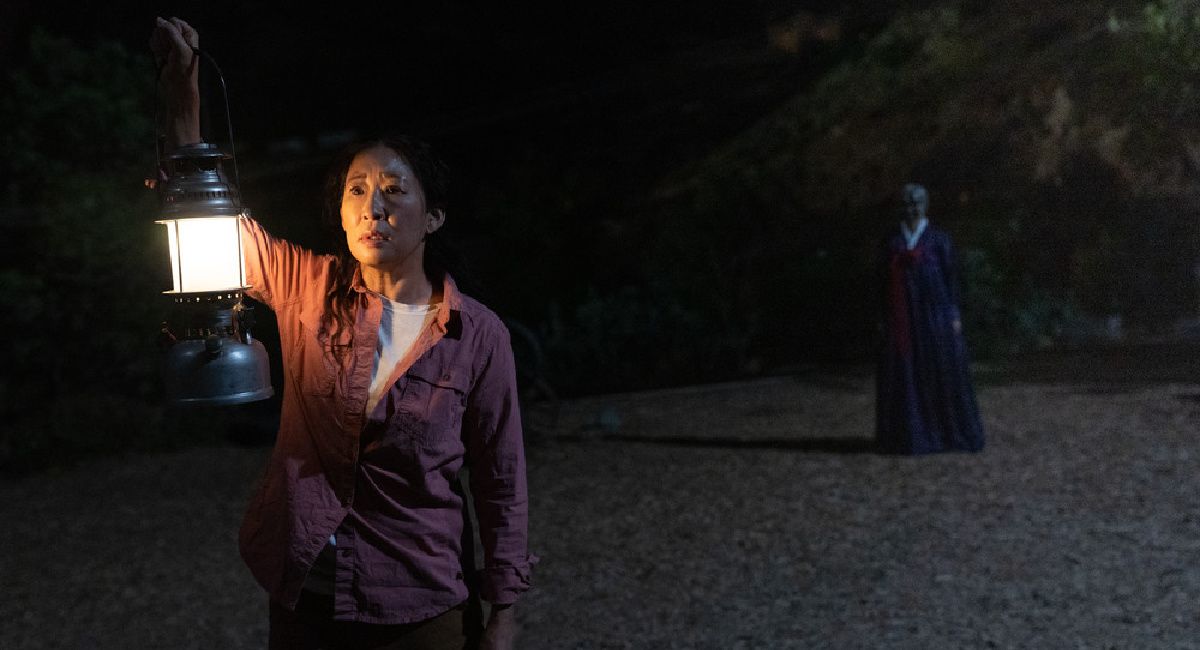 Opening in theaters on March 18th is the supernatural horror movie ‘Umma,’ from first time feature film director Iris K. Shim. The movie stars Sandra Oh (‘Sideways’) as Amanda, a Korean immigrant haunted by the ghost of her estranged mother, while raising her daughter (Fivel Stewart) on a rural farm.

The result is a well-made supernatural thriller masquerading as horror film with strong performances from its lead actresses but gets lost in its own exposition towards the movie’s climax.

Amanda (Oh) lives off-the-grid on a rural farm with her daughter Chris (Stewart), where they work as bee keepers. Amanda is “allergic” to electricity, and must stay away from modern technology, leaving her daughter cutoff from the outside world. Amanda is also estranged from her abusive Korean mother, who she left behind years ago. Never wanting to become her own mother, Amanda has lived her life protecting her daughter, but their relationship has become very co-dependent.

Trouble begins when Amanda’s uncle from Korea finally tracks her down to deliver her mother’s remains after her recent passing. Curious about her grandmother and the family she’s never known, Chris begins to resent the life Amanda has created for them and even questions her mother’s “sickness.” Soon, Amanda begins to be haunted by the ghost of her mother, and slowly realizes her greatest fear … she is, literally, becoming her own mother!

What I really like about this movie is that it is so clearly personal and from writer/director Iris K. Shim’s unique point of view. By focusing on Korean tradition and how that effects a person actively running away from their past and heritage is really interesting and is a great launching off point for this psychological thriller. Unfortunately, the movie falls into the trap of its own genre and is derailed in the third act when it retreats to becoming a full-fledged “ghost movie.” But before that, Shim crafts a small, intimate portrait of a mother raising her daughter in fear of her own past.

Another interesting aspect of Shim’s script is Amanda’s “illness” to electricity. Is it real? Is she truly allergic to electricity, or is it just a manifestation of her own traumatic experience? That’s an important question that the film explores, but again, ultimately drops its urgency when the ghost appears. Shim also explores a very relatable fear that most adults have – the fear of becoming their own parents. That is really at the core of the movie and an element of the screenplay that Shim and Oh explore well. I think if the film had focused on this aspect more, and not reverted to popular horror tropes in the third act, it would have been a more overall satisfying storytelling experience.

The movie is really a two-hander between Oh and Stewart, but also features supporting performances from Dermot Mulroney and Odeya Rush. Both actors are serviceable in their roles, but otherwise not given a lot to do. Rush’s character seems only to be added to demonstrate the contrast between Chris and other kids her age, which is necessary to drive the story, but some more character development would have been nice. Mulroney plays a local fond of Amanda, who has acted like a surrogate father to Chris over the years. His character is more defined, and while limited, his affection for the mother and daughter comes shining through.

Fivel Stewart gives a strong performance as Chris and is a great on-screen partner for Oh. The actress plays the innocent and sheltered teen well, and is excellent when she rebels against her upbringing, not unlike her mother had done years before. But the movie truly belongs to Sandra Oh, who gives a very commanding and grounding performance as Amanda.

Oh is completely in control of her performance and is at her best when battling the demons of her past in her own head. The actress delivers moments when you’re not quite sure if she’s Amanda, or Amanda possessed by her Umma (the Korean word for Mom), and her performance keeps the audience guessing. Oh has great chemistry with Stewart and is completely believable as a devoted mother becoming unhinged.

While the film has a great concept and some really interesting characters and situations, it does fall into the trap of the modern horror movie, forgoing its strong set up for standard scares at the end. The true joy of the film is its anticipation of the ghost, but when she actually appears, it’s not as scary as the build-up and a bit anti-climactic. In the end, writer/director Iris K. Shim delivers an original, intriguing, and personal thriller with great performances from its leads, that just doesn’t quite stick the landing.