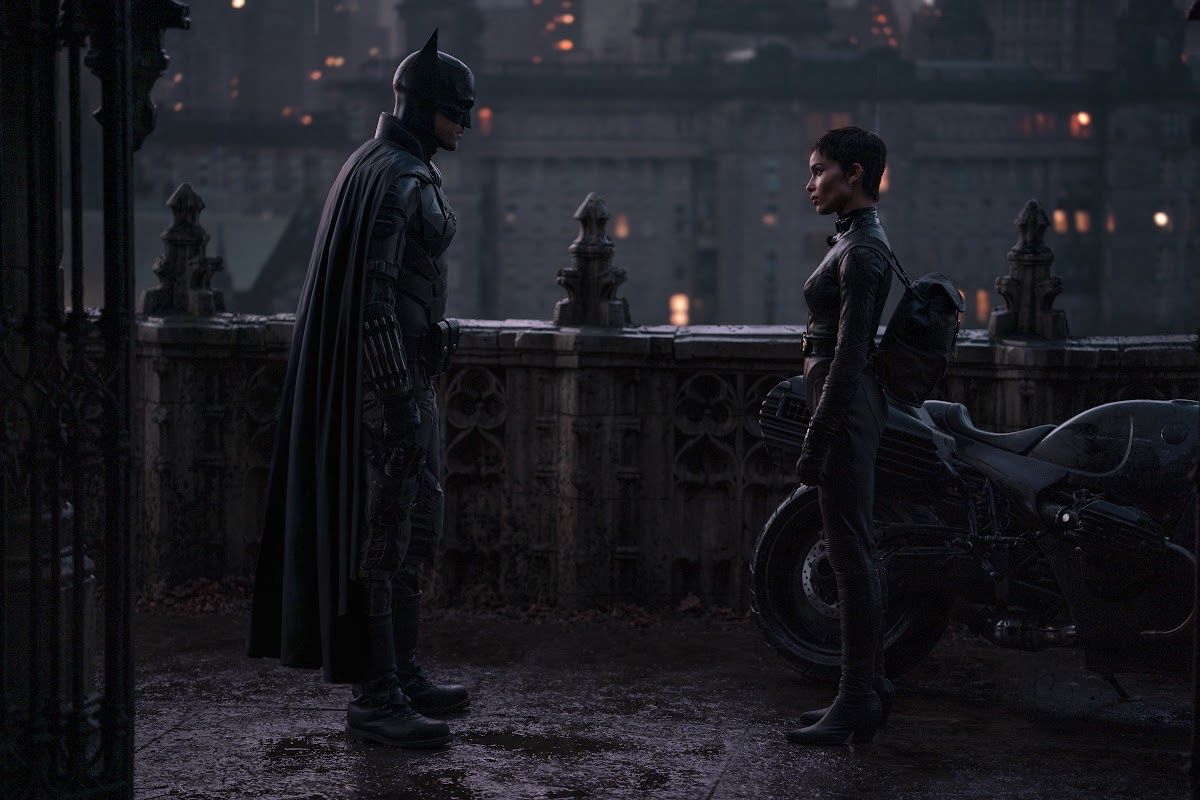 (L to R) Robert Pattinson and Zoe Kravitz in 'The Batman'

Director Matt Reeves and the team from ‘The Batman’ certainly seem to be tapping into what we all want from the movie, which is moody, stylish shots of stars such as Robert Pattinson and Zoe Kravitz. Hence the new posters for the upcoming superhero movie.

The first image is of Pattinson’s Bruce Wayne/Batman and Kravitz’ Selina Kyle/Catwoman standing on a Gotham City rooftop staring out towards a sunset. It’s classic Batman stuff – he spends so much time posing on rooftops that you sometimes wonder how he gets any crimefighting done.

(L to R) Robert Pattinson and Zoe Kravitz in 'The Batman'

We already know from ‘The Batman’s various teasers and trailers that Pattinson’s Wayne and Kravitz’ Kyle will have a connection that is by turns flirty and confrontational. Bruce is a guarded loner wrestling with a complicated Wayne family legacy, while Kyle is eager to kick some butt. Can they work together? The history of Batman and Catwoman team-ups suggest it’s risky at best.

Following that image, we have a close-up of Batman’s cowl, his eye peering from beneath. The slightly battered look of the cowl suggests he’s seen some serious clashes, while the tagline “Unmask the truth” points to Bruce’s journey as well as that of Edward Nashton, AKA The Riddler (Paul Dano). The cryptic villain’s aim – at least according to him – is cleaning up the “cesspool” that is Gotham. And he’s even got his eye on Bruce Wayne.

Robert Pattinson in 'The Batman'

Also in the cast are Colin Farrell as Oswald Cobblepot/The Penguin, a crime lord looking to secure his grip on power. This is a very different look for Farrell, here buried under prosthetics to bring his character to life. The Penguin’s story will continue to be told outside of cinema screens, as HBO Max is developing a TV series to follow the character in what has been described as a ‘Scarface’-style narrative. Reeves is an executive producer on the show, with Lauren LeFranc writing the initial script.

Jeffrey Wright is this movie’s Commissioner Jim Gordon, trying to combat the rising tide of crime and wondering whether he can trust the masked vigilantes. Andy Serkis, a veteran of working with director Reeves on the last couple of Planet Of The Apes movies is Alfred, the loyal Wayne family butler who here is not on the best of terms with his headstrong young charge.

Reeves’ style looks to hew more closely to Nolan’s realistic Batman than the more art deco, operatic days of Tim Burton and Joel Schumacher, or even the brute force aesthetic of Zack Snyder’s time in the DC Universe. His movie won’t be an origin story for Batman but is instead set in his early days as the crime-fighting hero.