Facinelli and Heche describe their characters, and Facinelli describes his own extreme weather experience.

The new thriller ‘13 Minutes’ focuses on different people in the path of a major tornado, and how they struggle to survive. The film’s stars Peter Facinelli and Anne Heche spoke to Moviefone about their new movie.

Moviefone: It's a big disaster, and then you don't know, at the end, what's going to happen. Are people going to learn something? Are they going to be better for it? What do you think, Anne?

Anne Heche: Well, is this where we... I think you're leading the question to exactly what you said. We have an opportunity to come together as communities, a lot of people have been hurting, all of us. All of us has been involved in something that affected all of us, not in the same way, in a different way, but the fact of the matter is that's exactly what ‘13 Minutes’ is doing. It's showing you six different stories of six different, completely different human beings and the scenarios that they're in, and how they need to strip basically their identity, to survive.

I think we are all in a place where it's time to strip ourselves of any distinction or separation that we've had, and get together in any community, whether it's our church communities, or our school communities, or whatever it is. I live in downtown LA, and you get to weave the fabric of healing, and being able to, as Peter and I have said now multiple times, what it feels like to overcome. And it takes more than yourself, you need a community to do it.

MF: Peter, have you ever been through an extreme weather situation?

Peter Facinelli: That's a good question. I remember I was in a RV once, and I did a movie called ‘The Vanished,’ that RV-

Heche: Wait a minute, is that that same RV? Hold on.

Facinelli: That was a disaster, some parts of that...

Heche: Was this the RV story that made you do and write ‘The Vanished,’ for me?

Facinelli: This is one of them... this wasn't in the movie, but I was driving my RV once, and the weather, all of a sudden, you know when you could smell in the air... the air just get ionized, and it's almost like you could smell the salt air, or it's going to downpour?

Facinelli: And then the whole sky got black, and then it became like day became night, and I remember being so terrified because I'm in this RV that could be like a tin can. And then I heard on the radio that there was a tornado warning. I didn't know then what the difference between a tornado warning or a tornado watch was, I do now because of this film. But it was scary, because I was driving towards it, and then at some point I just realized, "You know what, this is too dangerous." and I turned around, and I started going in the opposite direction because I was like, "I don't want to go through a tornado driving an RV." But it was, it was pretty scary.

MF: Where were you driving?

Facinelli: It might have been Oklahoma. It was one of... it was in middle America, for sure.

MF: Oklahoma? That's where we are here, in this movie. 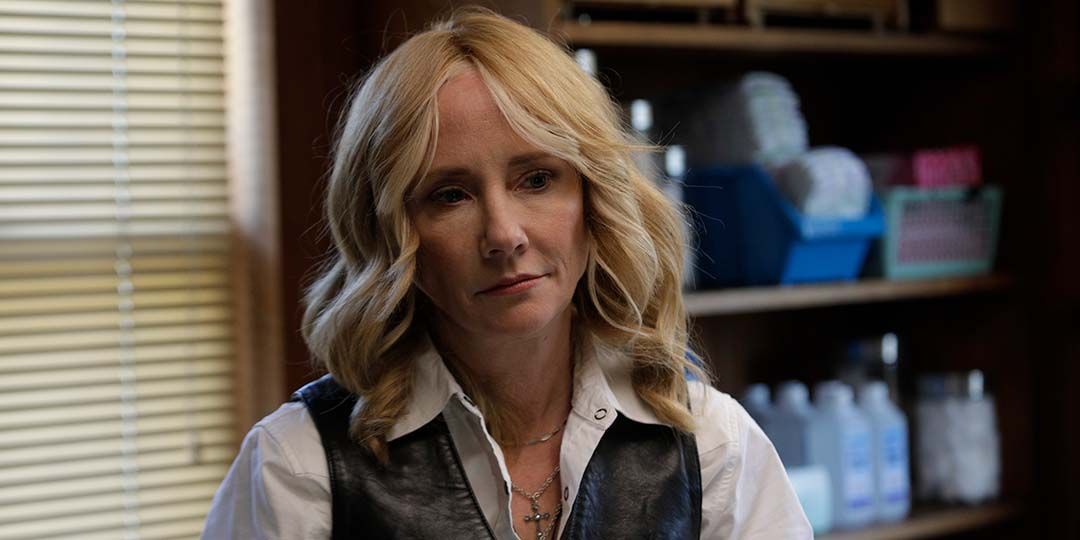 MF: Anne, describe your family in the movie. Describe Tammy and Rick and Luke.

Heche: Tammy, Rick and Luke? I would say Tammy and Rick are farmers, they are going through a difficult time many people are going through, farmers especially. And they want to get some windmills on their property, which is a new way, or is it once we promote real energy, but that's a lot of what farmers are doing, getting the windmills put on their property. And that's an issue for some because of the soil, and that's really where you come in with Tammy. Our son works for us on the farm, and he is also having an affair with one of the farmhands, who happens to be male.

That is our family trio, and the dynamic that they share during the 13 minutes, which should be one of healing and change, ends up confronting them in a disastrous way. Both with the threat of life for the father, and the threat of independence and love and joy for the son. So, and Tammy's is in the middle of that balance, and I'm not going to say whether or not I'm a fan of how she handles it, because that's part of one of the beauties of the stories that Lindsay wrote.

MF: They're a little intolerant, Rick and Tammy.

Heche: Well, we're a little intolerant, yes we are, and I think it was important for me to play that. I like that Lindsay came to me, and I have obviously stood up for the rights of us to be able to love judgment-free for 20 years. There are still stories that need to be told like this, so that we get the reactions from people that we need, in order to understand compassion for everybody.

MF: And Peter, you've got a beautiful family in this movie. Great jobs, beautiful little girl, what's your storyline?

Facinelli: I play Brad, who's the weatherman, and he's warning everyone that this tornado's coming, and he's very much concerned for all these strangers because he wants them to be safe. And then at some point, he realizes that this storm is about to hit him on a very personal level, because it's headed towards his family and his home. And then you have to make a very quick decision like, "Do I stay here at work, it's work or family." and he makes the obvious choice to go and try to save his family. But there's that sinking feeling when you can't reach loved ones, when a disaster happens, and you don't know if they're okay, and that's kind of where he ends up at the end of the movie.

And for me, I was just really interested in this film, because you go to disaster films not to watch the disaster, but you go to watch them overcome something. And so you see these people who are all intertwined because their storylines are all separate, but at the same time, we're all connected as a human race, so their storylines are somewhat intertwined as well. And then you're watching how they deal with this tragedy, this storm, and how some people band together, and some people fight with each other. And I think that's the entertainment there, is watching humanity when something destructive happens, watch how the people deal with it.

MF: These storylines though, in this movie, are dealing with some really deep issues, some really important issues. And for instance, Peter, your daughter in the movie, is hearing-impaired. And we kind of see... we get to see how she doesn't have the same accessibility.

Facinelli: Yeah. Yeah, that's the beauty of this film, too. I think Anne was saying her storyline deals with issues, you have people trying to buy homes when they can't afford it, you have my daughter who's deaf and hearing impaired, and how a thing like that can... all of a sudden your life can become on the line, because you're watching TV, and she can't hear what they're saying. So, how do you save yourself in that situation? And it becomes even more dire of a situation in that respect. So it's a really interesting film, because there are a lot of layers to this movie.

Facinelli: Yeah, that's a beautiful way to put it, yeah.

MF: So, Anne, what conversations did you have with director Lindsay Gossling?

Heche: Well, first of all, we have to celebrate Lindsay, because one of the things that I think is very important to her is what society is dealing with. And she really dives in, it's what makes her a unique director. I will put Peter Facinelli in that category, people who are willing to do something that take you to the end of the brink of what you think your emotions can handle. And Lindsay went into about six different stories here, putting all of these characters on the brink, right before the disaster happens. So everybody is already being pushed, in a way, to a limit that they don't and have not understood, and these 13 minutes makes them jump to the equation. Some of them win, some of them fail.

And that ability for her to write so many different stories that come together in the end as a community, I think it was a big thing, I think it was a huge challenge for her to do. And I know, and you asked, to get back to your question, what kind of conversation did I have with her? I had a conversation about what we wanted my character to be, to be able to do something that lives in a complete division of what society is going to think. It's one of my pleasures, is being able to be a 50-year-old actress in this world, who earns the right to be able to carry the kind of weight of making the wrong decision, in my opinion, if I can stand up and out. But in playing Tammy, I didn't think I was making the wrong decision, we're all storytellers, and that's what I talked about with Lindsay. "Let's tell this story in the most truthful way possible." Which means you can't try to play Mr. Nice Guy with me.